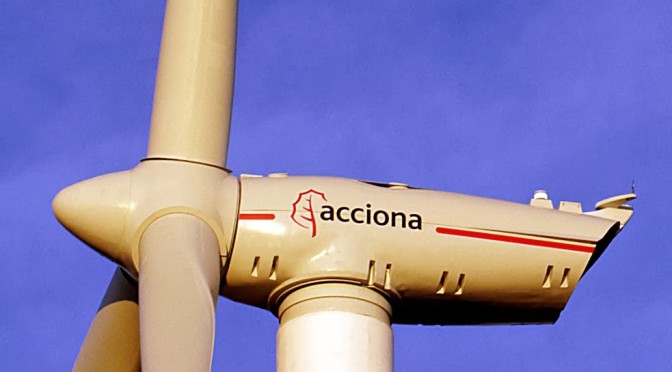 The wind farm will supply electricity equivalent to the consumption of 32,000 homes and will help the province of  reach its renewable energy targets.

ACCIONA has signed a contract to supply 34 wind turbines for a 102 MW wind farm in the Canadian province of Nova Scotia. It will carry out the construction, internal electrical infrastructures and assembly, and will also undertake the operation and maintenance of the facility.

The South Canoe wind farm, which will be the largest in Nova Scotia, has been developed by three local companies: Oxford Frozen Foods, Minas Basin Pulp and Power and the utility company Nova Scotia Power, to which the power generated will be sold. It will use ACCIONA Windpower AW3000/116 wind turbines, each with a capacity of 3 MW, hub height of 92m, and a rotor diameter of 116 metres.

The facility will supply electricity equivalent to the consumption of 32,000 homes and will help the province of Nova Scotia reach its renewable energy targets.

“ACCIONA was able to deliver what the South Canoe Project team asked for: a complete solution including highly-reliable and high-capacity turbines, construction services and operations and maintenance,” said Ilya Hartmann, CEO of ACCIONA Energy North America. “We’re pleased to apply our full range of wind energy services to provide the best value for this project.”

The supply of wind turbines was awarded to ACCIONA following a rigorous selection process and a detailed analysis of its experience in the sector. ACCIONA Windpower North America CEO Enrique Teruel says the company “is proud to be part of the South Canoe Wind Project and to continue expanding the track record of our AW3000 turbine in North America.”

To date, orders for the AW3000 turbines amount to 1,491 MW; the machines are destined for wind farms in nine different countries. Nearly half this figure corresponds to wind farms in North America, and 78% of the total capacity will be supplied to customers outside the ACCIONA Group.

ACCIONA Windpower’s wind turbines come with four rotor diameter options: 100, 109, 116 and 125 meters to suit the conditions at each site, and are mounted on steel and concrete towers with a height of between 87.5 and 140 meters.

The ACCIONA Group subsidiary signed a contract for the supply of AW3000/116 turbines for a 30 MW wind farm on Prince Edward Island, which is currently in the assembly phase. The 45 MW Lamèque wind farm in the New Brunswick province has been in operation since 2011; it is owned by ACCIONA Energía and is equipped with 1.5 MW AW1500 turbines.

As an owner, ACCIONA also participates in three other wind farms in Canada: Magrath and Chin Chute in the province of Alberta (both 30 MW) and Ripley in Ontario (76 MW).

ACCIONA Energy is a global operator in clean energies with more than 20 years’ experience in the sector and a strong presence in seven renewable technologies. It has installed almost 10,000 MW for clean electricity generation, of which 8,500 MW are owned by the company. In wind power it has 7,159 MW in operation in 14 countries. It develops projects for itself and other customers and is present throughout the wind power value chain. Its subsidiary ACCIONA Windpower designs and manufactures 1.5 and 3 MW turbines. It has assembled wind turbines totaling 4,360 MW and currently has additional orders that take it above 5,500 MW.

It belongs to the ACCIONA Group, one of the biggest Spanish corporations, which operates in infrastructures, energy, water and services in more than 30 countries. Its motto “Pioneers in development and sustainability” reflects its commitment – in all its activities – to contribute to economic growth, social progress and the protection of the environment. This commitment has been recognized by the company’s inclusion on the Dow Jones (DJSI) and FTSE4Good sustainability indexes. ACCIONA is listed on the Ibex-35 stock index, has a workforce of around 31,000 people worldwide and earned revenues of 7,016 million euros in 2012.