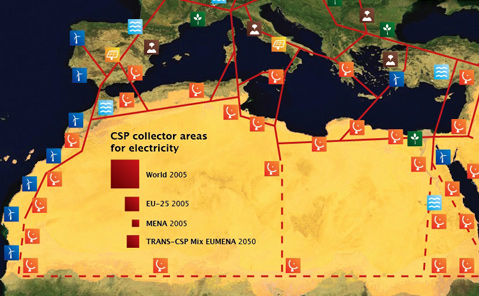 Through its research subsidiary, China Electric Power Research Institute, SGCC will become a shareholder in Dii, whose mission statement is to tap into the sun and wind energy potential of the world’s desert regions.

“One of the strategic focus areas of SGCC is the global allocation of renewable energy. In this framework, SGCC is very keen to find options for contributing effectively to future transmission extension projects connecting countries and continents,” said Dr. Liang Zhong Yao, CEPRI’s vice president.

“We regard Dii as a unique alliance with a strong reputation for the integration of renewable energy from the deserts into interconnected power systems.”

The partnership with SGCC will enable Dii to end the year on a brighter note. In July, an acrimonious dispute prompted a split between Dii and the Desertec Foundation, the non-profit body originally behind the concept of exploiting the renewable energy potential of desert regions. Dii had previously also lost a number of its other shareholders, including Siemens and Bosch.

The organisation also moved away from its original aim of trying to secure 20% of Europe’s electricity supply from links to huge solar and wind projects in northern Africa.

“We feel all very honoured that SGCC decided to reinforce the ranks of our international industry initiative as a new shareholder. I warmly welcome that SGCC´s highly respected research institute CEPRI will among others contribute comprehensive experience in transmission and renewable energy technologies to our initiative,” said van Sonn.