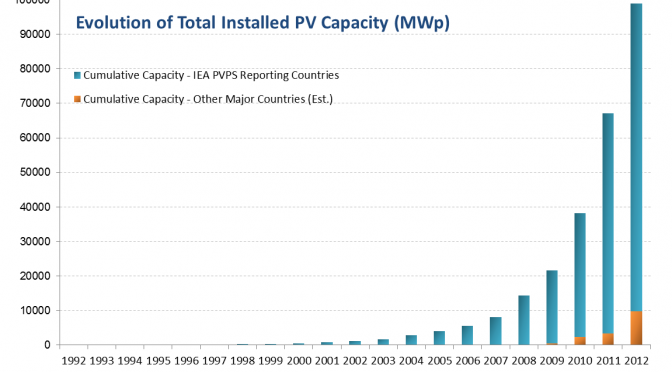 IHS estimates that 40–42 GW of solar photovoltaic (PV) capacity will be installed globally in 2014. This would represent a 15% increase over 2013 levels but is a lower estimate than has been given by other analysts.

Citing its Solar PV Demand Tracker, IHS warns of several risks, including an “increasingly likely” boom-and-bust cycle in Japan, due in part to the pending end of the nation’s residential feed-in tariff. The company also says that it expects ample supply of PV components and a moderate decline in PV module, inverter and balance of system prices.

“Despite several recent viewpoints claiming that the PV installations could reach up to 55 GW in 2014 and will be coupled with supply constraints and major price increases, the latest quarterly update on solar demand from IHS disagrees significantly with these views and expects installations to be in the range of 40–42 GW next year,” states IHS Senior Director of Solar Research Ash Sharma.

IHS also expects that China will install only 9.5 GW of PV in 2014, instead of its goal of 12 GW. The company cites the lack of a framework to support the move towards distributed generation, and states that it does not believe that the nation’s target to install 8 GW of PV is achievable.

IHS also estimates only 7.7 GW of 2014 PV capacity to be added from “emerging markets”, up from 5.4 GW in 2013. The company warns that other forecasts presented for emerging markets are “very bullish” and do not account for the very different market conditions, noting the slow progress developing plants in Chile and South Africa.