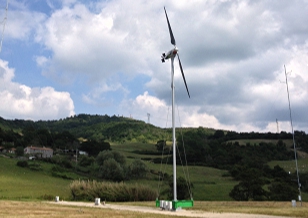 Enel Green Power is innovating across a number of renewable energy fields, a commitment which has seen the development of Renzo Piano’s mini-wind turbine blade and the cutting-edge R115 wave generator.

Innovation is one of the key elements of a successful entrepreneur’s formula, and this is why Enel Green Power is focusing on the research and development of cutting-edge technology like the mini-wind turbine blade, which was designed by Renzo Piano and developed in conjunction with EGP and is currently being tested at the Molinetto test field in Pisa, where it has produced more than 1,200 kilowatt-hours in two months.

The two-blade turbine is extremely slim and less visible than traditional three-blades. They can barely be seen on the landscape and operate even with weak wind, the result of research on new, lighter and more resilient materials. It has already captured the interest of Genoa port authorities, who want to use it as part of a wind power project on the port’s seawall.

Besides generating electricity in heavily populated areas, Enel also innovates by making use of renewable energy sources that up to very recently have been rarely or never used before, such as the R115 wave generator, a device developed by the 40South Energy which can convert sea wave energy into electricity and is being tested at Punta Righini in Tuscany.

The R115 is well-suited to the Mediterranean basin, as it can also be applied in areas of low wave energy intensity or where sea beds are not particularly deep, such as on the Italian coastline or the Mediterranean in general. It works underwater, meaning both that it will work even in poor weather conditions and that it does not alter the natural landscape.

In addition to the sale of the first R115 generator to EGP and collaboration on its testing, the agreement with 40South Energy also provides for the possibility of installing more generators in different marine environments.