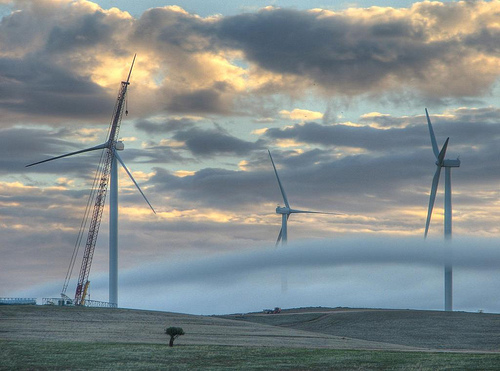 Boralex Inc. (“Boralex”) and the Témiscouata RCM have started building the Témiscouata community wind farm. The occasion was marked by a ground-breaking ceremony attended by Patrick Lemaire, President and Chief Executive Officer of Boralex, Serge Fortin, Reeve of the Témiscouata RCM and a number of dignitaries. The wind farm will have an installed capacity of 23.5 MW.

“This is an important project for the region and it will definitely be good for the local economy and help develop local expertise in wind power,” said Fortin.

“Boralex is proud to be partnering this wind power project and working with a region that has a reputation for bold and dynamic action. The Témiscouata RCM enthusiastically welcomed and supported this project and I thank you for your trust in us,” said Lemaire.

Construction of the Témiscouata community wind farm will involve a total investment of $65 million, of which at least $39 million will be spent in Québec. The contractor chosen to do the work is Construction Hamel.

This year the focus will be on clearing and road-building. In 2014, completion of the roads, foundations, collector system, substation, transportation of components and installation of the 10 wind turbines will make it possible for the wind farm to start operating in December 2014.

Up to 50 jobs will be created during construction, with three permanent jobs in the 20 years of the life of the plant. Workers will receive a guide to encourage use of local resources and maximize the positive impact on local communities.

The website for the Témiscouata wind farms will be updated weekly with
information about the progress of the work (eolientemiscouata.com).

About the Témiscouata wind farms

Boralex is a power producer whose core business is dedicated to the development and the operation of renewable energy power stations. Currently, the Corporation operates an asset base with an installed capacity of almost 500 MW in Canada, the Northeastern United States and France. Boralex is also committed under power development projects, both independently and with Canadian and European partners, to add approximately 550 MW of power that will be commissioned by the
end of 2015. With more than 200 employees, Boralex is known for its diversified expertise and in-depth experience in four power generation types — wind, hydroelectric, thermal and solar. Boralex’s shares and convertible debentures are listed on the Toronto Stock Exchange under the ticker symbols BLX and BLX.DB, respectively. More information is available at www.boralex.com or www.sedar.com.

The Témiscouata regional county municipality is an organization that oversees land development, town planning, environmental protection, and regional, cultural, social and community development. Chaired by an elected reeve, the RCM council is composed of the mayors of the 19 municipalities in its territory. Through political action, the RCM provides leadership on behalf of its citizens. In addition to addressing the physical organization of its territory, the RCM is involved in a number of regional development issues that have a direct impact on the well-being and quality of life of its communities.