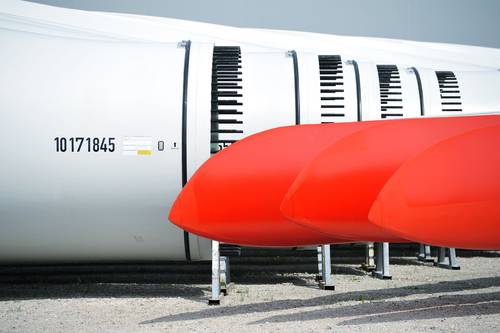 Since mid-August, Hamburg’s port has hosted a new inland wind turbine whose rotor blades are nearly 60 meters long. BASF’s RELEST® coatings make a crucial contribution to the longevity of the turbine.

They ensure high surface quality and protect the glass-fiber reinforced plastic rotor blades from enormous stresses brought about by weathering, erosion and UV radiation, for example.

The turbine manufactured by Nordex has a 141-meter high tower. The tower’s height, which is extraordinary for Hamburg, makes it especially productive.

The N117/2400 turbine provides a container terminal at the port with up to 8.7 million kilowatt hours of electricity per year. This is equivalent to the annual energy needs of nearly 2,000 four-person households in Germany. The rule of thumb is, the higher the wind turbine’s tower, the greater the yield, which increases by 0.7 to 1 percent per meter of height. This means that the wind turbine’s height, which is above Hamburg´s average, will pay off in terms of both economic and ecological efficiency.

“In order for wind energy to pay off, it must be guaranteed that the turbines’ production will be efficient but also that it will have a service life of at least 20 years,” said Dr. Wolfgang Kranig, head of Postcoatings at BASF. “For this reason, our paints are designed both to provide efficient coating and to fully protect the rotor blade surface from the enormous environmental stresses.” At speeds of up to 300 kilometers per hour at the blade tips, rain, snow and hail attack the surfaces, which can lead to erosion. In order for the rotor blades to be as aerodynamic as possible, the surface finish must also be smooth and flawless.

Using robots to speed up coating

Prior to assembly in Hamburg, the turbine’s rotor blades were coated in Rostock. In a highly automated process, Nordex applies BASF gelcoat and topcoat to the surfaces. The gelcoat performs the function of a safety coat to make the finish resistant to impacts. The topcoat provides surface qualities such as smooth flow and mat appearance. This prevents problems such as airplane pilots being blinded by the reflecting sunlight. The paintline in Rostock is set up to handle a rotor blade length of 60 meters. Two application robots apply the coating simultaneously. “Using robots makes application 50 percent faster than application by conventional methods. The process has a number of advantages. The uniform layer thickness allows us to use materials economically, which makes it easy on the environment,” explained Felix Losada, press spokesperson at Nordex. “The applicability and properties of BASF’s coatings complement our technology very well. Pooling our competence allows us to achieve first-class surface performance that is reproducible and consistent.”

The partnership between Nordex and BASF was established in June 2008. Nordex has installed multi-megawatt turbines using BASF’s RELEST® Wind industrial coatings product group at many wind parks throughout Germany, for example in the states of Hesse, Bavaria and Schleswig-Holstein. The two companies have also teamed up for wind-turbine construction internationally, in countries such as Sweden, South Africa and Turkey. One of the largest joint projects is the wind park installed in the United States in 2012 that comprises 34 turbines. The next project to be undertaken by Nordex and BASF is a new medium-wind system. The installation at the Hamburg port starts between late 2013 and early 2014.