Showing continued growth in the solar market, this quarter’s report finds that the U.S. installed 832 megawatts in Q2 2013, representing 15 percent growth over the first quarter of this year. It was solar’s second best quarter ever. 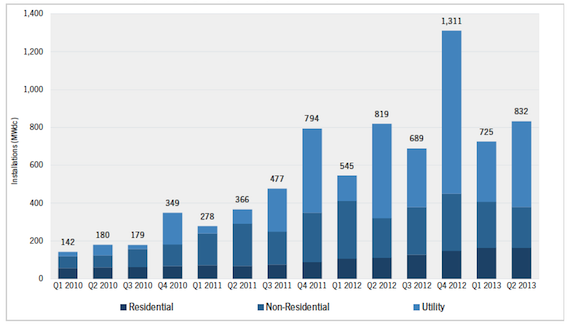 The largest share of photovoltaic (PV) installations came from the utility sector, with 38 completed projects totaling 452 megawatts, a jump of 42 percent over last quarter. The residential market experienced a slight hiccup in Q2 2013, breaking its streak of incremental quarterly growth with a flat quarter, and in the non-residential (commercial) market, only thirteen out of the 28 states tracked in the report showed quarterly growth. However, the report forecasts a resumption of growth in the second half of 2013, with 4.4 gigawatts of PV expected to come on-line this year, up from 3.3 gigawatts in 2012, an overall annual growth rate of 30 percent.

As always, the solar market experienced significant variability across states in Q2 2013. California installations increased 7 percent over Q1 2013 despite the end of incentives in some states, an indicator of solar’s increasing competitiveness. Overall, twenty of the 28 states tracked in the report are on pace to increase their annual installation of solar energy over 2012. 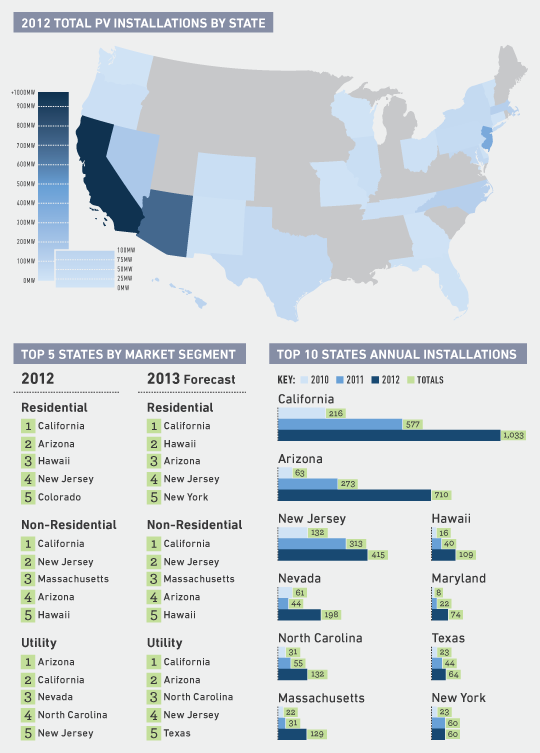 “Distributed generation is the big story in the U.S. solar market this year,” said Shayle Kann, Vice President of Research at GTM. “We expect significant growth, especially in the residential sector, but the future will be dictated by the increasingly complex nexus between the solar industry and utilities.”

Looking at the U.S. solar market on the whole, U.S. Solar Market Insight: 2nd Quarter 2013 forecasts over 5 gigawatts of PV and concentrating solar power will be installed by the end of 2013. At that time, cumulative solar PV capacity will surpass 10 gigawatts.

Join GTM Research and Greentech Media at the third annual U.S. SMI Conference taking place December 10-11 in San Diego. This two-day conference will bring together market leaders to take a deeper dive into some of the most important trends and opportunities in the market. For more information, and to register, please visit: http://www.greentechmedia.com/events/live/u.s.-solar-market-insight-2013.