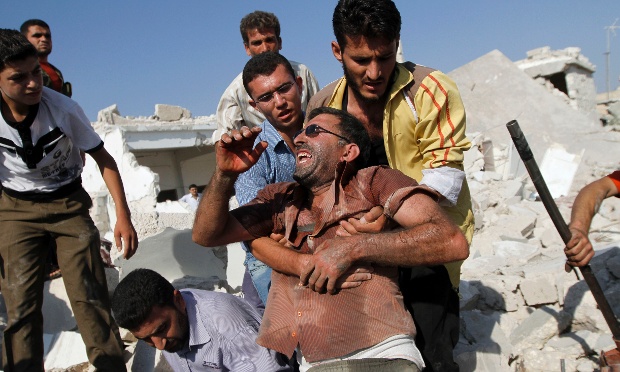 Among the factors that have driven the Syrian people to rise up against the Assad regime was a climate-change-related drought that caused a famine, according to ex-U.S. State Department advisor William Polk.

“Syria is and has always been a complex society,” Polk wrote recently in describing the conflict’s context for The Atlantic. But it “has been convulsed by civil war since climate change came to Syria with a vengeance. Drought devastated the country from 2006 to 2011. Rainfall in most of the country fell below eight inches a year, the absolute minimum needed to sustain un-irrigated farming. Desperate for water, farmers began to tap aquifers with tens of thousands of new wells.  But, as they did, the water table quickly dropped to a level below which their pumps could lift it.”

Scientists warn that a specific drought cannot be causally linked to global climate change. It is more accurate to think of climate change as a “threat multiplier,” according to the editors of The Arab Spring and Climate Change from the Center for American Progress.

“In Syria,” they wrote, “a combination of ‘social, economic, environmental and climatic changes … eroded the social contract between citizen and government in the country, strengthened the case for the opposition movement, and irreparably damaged the legitimacy of the Assad regime.’” 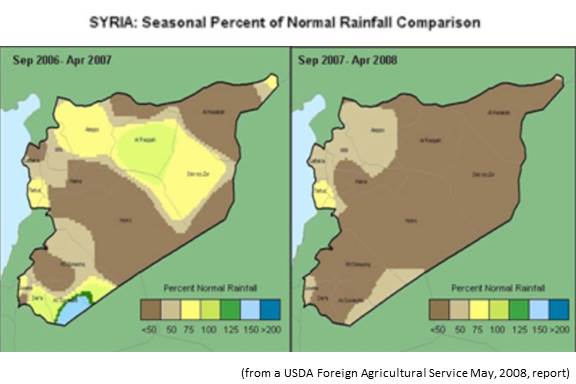 “In some areas, all agriculture ceased,” Polk wrote of the drought which has been described as the worst “since agricultural civilizations began in the Fertile Crescent.”  Some regions had 75 percent crop failures. Hundreds of thousands of farmers migrated, in search of disappearing jobs and scarce food. “In the desperation of the times, hostilities erupted among groups that were competing just to survive.”

Polk chronicled failures to respond by USAID and bad decisions by the Syrian government but the threat multiplier was already at work.

“So tens of thousands of frightened, angry, hungry and impoverished former farmers,” Polk wrote, “constituted a ‘tinder’ that was ready to catch fire.  The spark was struck on March 15, 2011, when a relatively small group gathered in the town of Daraa to protest against government failure to help them.”

The Assad regime cracked down. Riots broke out. The government cracked down harder. By the spring of 2013, 100,000-plus had been killed, some two million had lost their homes, and two million more had fled abroad. “Vast amounts of infrastructure, virtually whole cities like Aleppo, have been destroyed,” Polk wrote. But the war seemed “stalemated.” Until the Assad government used chemical weapons.

“Attribution of extreme events is a challenging science,” acknowledged Explaining Extreme Events of 2012 from a Climate Perspective, a set of nineteen analyses by eighteen research groups from the American Meteorological Society. But “overall, these results agree with previous ones,” a study of drought on the Iberian Peninsula concluded, “and showed a tendency toward a drier Mediterranean for the period 1970–2010 in comparison with 1901–70, and that such a trend has been partially driven by the anthropogenic emissions of greenhouse gases and aerosols…“