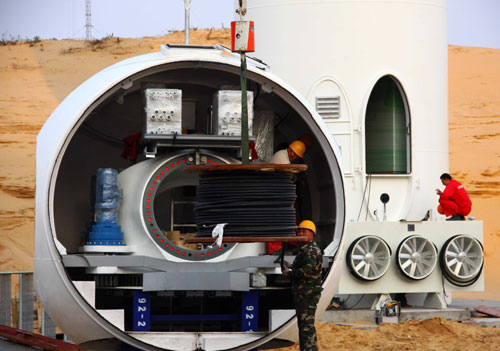 But the 56-year-old wind-power expert recently had his first holiday there, courtesy of the Chinese government. The trip was to thank him for his contribution to the country.

The one-week holiday is part of the Friendship Award, China’s highest honor for foreign experts. DuBois, a German, is director of China Wind Power (Research and Training) Program, a project to pass on German renewable energy know-how to China.

“My dream is to have China renewably powered, and technically it is possible,” DuBois says.

“Those who were interested at that time were only engineers, who were neither economists nor decision makers,” says DuBois, who decided to work in the renewable energy field after several nuclear reactor accidents in the late 1970s.

To him, nuclear is not green energy.

“The conversion process of uranium ore to fuel still contains CO2, and the nuclear waste can stay dangerous for thousands of years. It is just irresponsible to put our future generations in danger,” he says, adding that’s the reason he completed a master’s degree in renewable energy in Britain in the early 1980s.

He’d been involved in many projects in developing countries until 1990, when he got his first project in China – a small wind farm on a remote island named Shengsi in Zhejiang province. The pilot project was the country’s second wind farm and the first with foreign funding.

The project is regarded as the most successful of seven projects the German government funded in developing countries between 1985 and 1993, he says.

“It was like we planted a seed in China’s wind power sector.”

Many cities in China became interested in building farms, prompting the German government to offer low-interest loans to China for wind turbines.

The pilot projects helped the German side secure about 20 wind-farm contracts from China. DuBois flew to China once or twice a year in the 1990s to help Chinese customers check the quality of the equipment because few Chinese had the requisite skills.

With China’s wind power industry growing steadily since 2000, it was clear to the German government that China no longer needed its financial assistance.

“We’d seen that in 2002 if China wanted to largely develop its wind power, it needed to build up its manpower,” DuBois says.

“In Germany we think it is in our own interest if China’s wind farms work appropriately and save CO2 instead of just standing there.”

He moved his family to Beijing in 2005 and to run the program in China.

“Basically the program is a training center We think it is very important because the development in this sector in China is so rapid, that there is not enough time for people to learn why things are done in certain ways.”

He attributes his Friendship Award to good fortune and says he could not have won it without the help of his Chinese colleagues.

Wang Weisheng, director of the Renewable Energy Department at the China Electric Power Research Institute, says: “It is very rare for such an international cooperative project to last so long. Though he speaks little Chinese, he truly understands our needs and requirements. So, he acts perfectly as the bridge between the Chinese side and the German side.

The Sino-German training program is due to end in October next year, but DuBois has no plans to leave China, which he now considers home.

“I would like to be part of the change in renewable energy and to contribute my full potential in China,” he says.

“There is so much to be done in China’s renewable sector.”