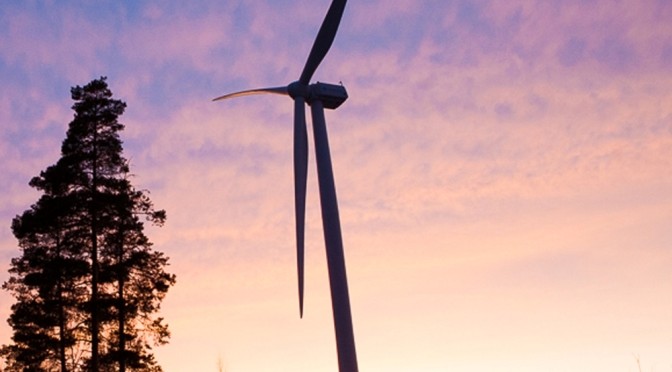 Wind turbines are almost invariably mounted atop steel towers as much as 80 metres in height.

It’s not something most of us think about. Steel was used in the early days of wind power, and there hasn’t been any reason to switch to other materials.

But a group of researchers at Iowa State University’s Wind Energy Initiative, are looking at something else, especially for taller towers.

At 80 metres, says Sri Sritharan, who heads the initiative, “steel towers have reached their limits.”

“Increasing the steel tower by 20 metres will require significant cost increases,” he says, adding that because of this, “the wind energy industry is starting to say, ‘Why don’t we go to concrete?’”

That height is desirable because the winds there are usually stronger and less susceptible to turbulence. But those stronger winds mean the towers must withstand larger loads.

Sritharan cites several factors that he says give concrete an advantage over steel. For a start, he says steel towers apparently have a 20-year lifespan, and concrete would increase that. Concrete towers would be precast in small pieces for easier and cheaper trucking. And precast concrete is available virtually everywhere.

The towers would be hexagonal in cross-section, with six panels connected to thin columns, with a number of possible systems for connecting the pieces. The construction would be versatile enough to be tailored for any turbine size, or to heights above 100 metres.

Test segments have been cast in three versions, and all withstood 150,000 pounds of lateral load, well above the expected operational load of 100,000 pounds.

Sritharan says the tests have shown that the system has the potential to be deployed to a 100-metre height for 2.5- to three-megawatt systems.

The steadier winds at 100 metres, plus the longer turbine blades possible with taller towers should mean, he says, that energy production could increase by about 15 per cent.

The research efforts have been financed by Iowa state grants, and by industry partners, including Calgary-based Lafarge North America.

But it’s not only the concrete industry that’s interested in taller turbine towers. In Germany, an outfit called TimberTower, has built a 100-metre tower topped with a 1.5-MW turbine.

Glue-laminated timber panels were used in the construction. They were assembled on-site into a closed, hollow body with a hexagonal cross section.

The company says the tower uses wood that has been certified to have been harvested in a manner that saves energy and is environmentally friendly. And when you consider the carbon dioxide embodied in the wood, the company says, “wood beats steel as a green tower option.”

The company says the tower has a minimum life cycle of 20 years. And it says it can safely build even taller towers. They have a 140-metre tower on the drawing boards, and claim that a height of 200 metres can be achieved economically.

What they don’t say is whether there is any reason to send towers up that high. Are the winds at that level stronger and/or steadier than at 100 metres?

It’s hard to say whether wood will ever capture a part of the turbine-tower market, or whether it will remain a curiosity. The company notes in its news releases that wood scarcely figures in the production of wind energy plants, adding that the Timber Tower “will change all this.”

Perhaps. But builders have long experience with building things with steel or concrete, especially in North America. That alone would make the United States and Canada tough nuts to crack.

The concrete towers are likely to be a better bet. After all, outfits the size of Lafarge don’t throw research money at ideas that don’t have a reasonable degree of success.