The Energy Department released two new reports today showcasing record growth across the U.S. wind market — increasing America’s share of clean, renewable energy and supporting tens of thousands of jobs nationwide. According to these reports, the United States continues to be one of the world’s largest and fastest growing wind markets. In 2012, wind energy became the number one source of new U.S. electricity generation capacity for the first time – representing 43 percent of all new electric additions and accounting for $25 billion in U.S. investment.

In the first four years of the Obama Administration, American electricity generation from wind and solar power more than doubled. President Obama’s Climate Action Plan makes clear that the growth of clean, renewable wind energy remains a critical part of an all-of-the-above energy strategy that reduces harmful greenhouse gas emissions, diversifies our energy economy and brings innovative technologies on line. The Obama Administration has committed to another doubling of the renewable electricity generation from energy resources like wind power by 2020.

“The tremendous growth in the U.S. wind industry over the past few years underscores the importance of consistent policy that ensures America remains a leader in clean energy innovation,” said Energy Secretary Ernest Moniz. “As the fastest growing source of power in the United States, wind is paving the way to a cleaner, more sustainable future that protects our air and water and provides affordable, clean renewable energy to more and more Americans.”

The tremendous growth in the overall U.S. wind industry has led directly to more American jobs throughout a number of sectors and at factories and power plants across the country. According to industry estimates, the wind sector employs over 80,000 American workers, including workers at manufacturing facilities up and down the supply chain, as well as engineers and construction workers who build wind installations.

Last year, over 13 gigawatts (GW) of new wind power capacity were added to the U.S. grid – nearly double the wind capacity deployed in 2011. This tremendous growth helped America’s total wind power capacity surpass 60 GW at the end of 2012 – representing enough capacity to power more than 15 million homes each year, or as many homes as in California and Washington state combined. The country’s cumulative installed wind energy capacity has increased more than 22-fold since 2000.

At the same time, the proportion of wind turbine components such as towers, blades, and gears made in America has increased dramatically. The report estimates seventy-two percent of the wind turbine equipment installed in the U.S. last year was made by domestic manufacturers, nearly tripling from 25 percent in 2006-2007.

The report also finds that nine states now rely on wind power for more than 12 percent of their total annual electricity consumption – with wind power in Iowa, South Dakota and Kansas contributing more than 20 percent. Additionally, Texas added over 1,800 megawatts of wind power last year, more than any other state. On a cumulative basis, Texas remains a clear leader with over 12 GW installed at the end of 2012 — more than twice as much as California, the next-highest state.

Also according to the Energy Department’s 2012 Wind Technologies Market Report, technical and design innovation allowing for larger wind turbines with longer, lighter blades has steadily improved wind turbine performance and has expanded wind energy production to less windy areas. Since 1998, the average capacity of wind turbines in the U.S. has increased by 170 percent. At the same time, wind project capital and maintenance costs continue to decline, lowering the cost of wind energy to near-record lows. The price of wind under long-term power purchase contracts signed in 2011 and 2012 averaged 4 cents per kilowatt hour – making wind competitive with a range of wholesale electricity prices seen in 2012.

Compared to traditional, centralized power plants, distributed wind energy installations directly supply power to the local grid near homes, farms, businesses and communities– helping to improve grid reliability and efficiency. Turbines used in these applications can range in size from a few hundred watts to multi-megawatts, and can help power remote, off-grid homes and farms as well as local schools and manufacturing facilities. Over the past ten years, the U.S. distributed wind market has grown more than five-fold.

The report finds that distributed wind in the U.S. reached a 10-year cumulative installed capacity of more than 812 megawatts (MW) at the end of 2012 – representing more than 69,000 units across all 50 states. Between 2011 and 2012, U.S. distributed wind capacity grew by 175 MW, with about 80 percent of this growth coming from utility-scale installations. At the state level, Iowa, Massachusetts, California and Wisconsin led the nation in new distributed wind power capacity in 2012.

Still, most distributed wind buyers continue to choose small wind turbines, which have a rated capacity of no greater than 100 kilowatts. Last year, domestic sales from U.S. wind suppliers accounted for nearly 90 percent of new small wind generation capacity. Broadly, nine out of the top ten wind turbine models installed last year in U.S. distributed applications were made in America. 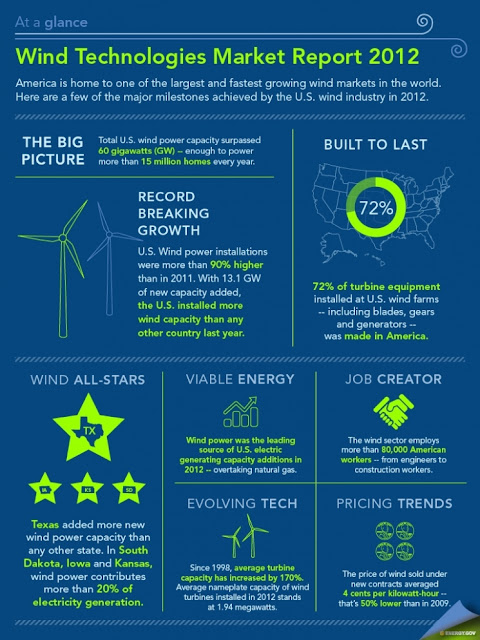 The wind sector’s growth underscores the importance of continued policy support and clean energy tax credits to ensure that wind manufacturing and jobs remain in America. The 2012 Wind Technologies Market Report expects 2013 to be a slow year for new capacity additions, due in part to continued policy uncertainty and project development timelines. While the report notes that 2014 is expected to be more robust, as developers commission projects that will begin construction in 2013, it also notes that projections for 2015 and beyond are much less certain.

For more information on these two new reports – including infographics, video and our latest interactive map – visit www.energy.gov/windreport. Join us Thursday, August 8, to discuss key findings from the reports during a special Google+ Hangout on wind energy in America.