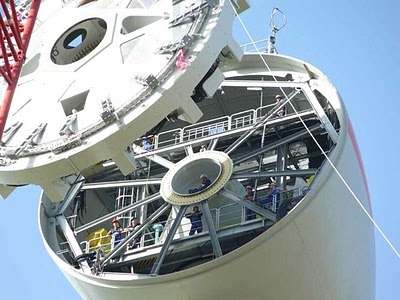 Operations at the new rotor blade factory for Enercon’s E-101/3 MW series started up in record time. Construction of the approximately 26,600 m² production facility started in summer 2011 and test operations began just slightly over a year later. In the  meantime, Aero Ems GmbH is now producing one to two blade sets per week.
“Building a high-tech rotor blade factory on greenfield land and getting it up and running in such a short time is quite an achievement,” said Enercon Managing Director, Hans-Dieter Kettwig acknowledging the commitment of all employees involved. Prime Minister Weil was also visibly impressed and applauded Enercon for its investment in the Emsland region.
Enercon has already created more than 550 jobs at the plant next to the Eurohafen. Once production has been ramped up to full capacity, the number of employees will increase to 600. By then, more than 300 E-101 rotor blades are expected to leave the factory by road, rail and train annually.
The site’s excellent logistical infrastructure was one of the decisive factors for choosing this location. Haren also offered good framework conditions for recruiting qualified and motivated staff.
“In addition, regional politics highly supported the project along with the fact that Enercon’s founder Aloys Wobben is originally from the Emsland region,” says Hans-Dieter Kettwig. 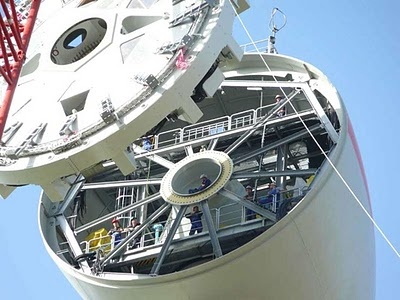 At the plant in Haren – as at the KTA manufacturing site in Aurich – the production facilities for the E-101 blades are state-of-the-art. Production has been optimised and speeded up through increased automation. For instance, bonding the pressure and suction faces of the rotor blades is now done automatically by means of a gluing portal. The blade flanges are mechanically worked in an automated milling centre and the unfinished blade shells are painted by means of paint robots assuring better precision and quality.
http://santamarta-florez.blogspot.com.es/2013/06/the-enercon-wind-energy-company-opens.html