Cuba will show its progress in World Wind Energy Conference and Renewable Energy Exhibition WWEC-2013 in Havana, from June 3 to 5, with a special focus on the Caribbean and Central America.

The island wants to increase the use of wind energy and at the north coast of the eastern province of Las Tunas, a place of ideal conditions, it builds its largest wind farm of 50 megawatts of power, which will reduce oil imports and reduce greenhouse gas emissions to the atmosphere.The major renewable energy project stands in an area where there is a persistent breeze regime with an organized flow of 5.6 meters per second. 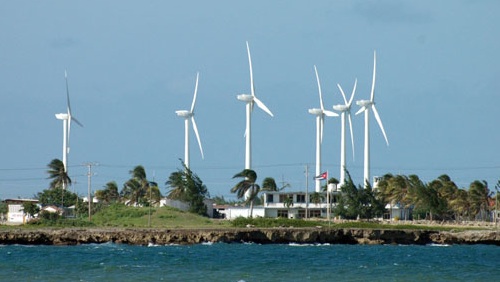 This region has proximity to ports and industries, a coast clear, little whip meteorological phenomena and reduced environmental impact, highlight a provincial newspaper article.World conference participants, which will focus on “Opening the Doors to Caribbean Wind” will discuss topics related to wind farm projects, their operation in extreme weather conditions, monitoring and maintenance.

The three-day conference includes panels and presentations focused on models, business, politics, finance, regional integration of renewable energy, technology, human resources training, among others. An exhibition and trade fair will show in the Palace of Conventions in Havana, venue of the event, new technologies, suppliers and manufacturers in the renewable energy sector.

Tania Carbonel, of the conference organizing committee, told the national press that the conference is expected to involve about 150 foreigners and 300 Cuban delegates from scientific institutions and educational services.The World Wind Energy Association WWEA, the Center for Renewable Energy Technologies Study of the Higher Polytechnic Institute Jose Antonio Echeverria, the Ministry of Basic Industry of Cuba, the Latin American Wind Energy Association and the Cuban Society for the Promotion of Renewable Energy and Environmental Respect organized the meeting.