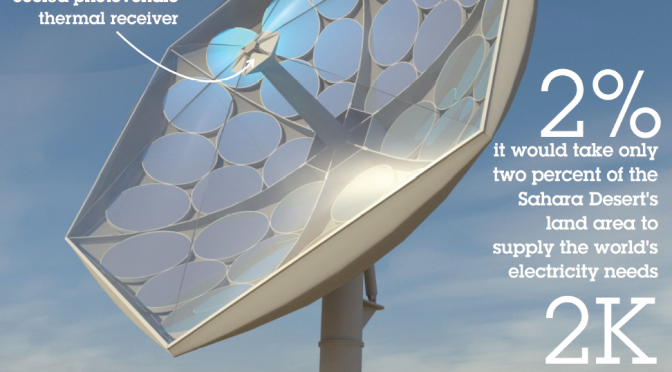 Fueled by a $2.4M USD grant from the Swiss Commission for Technology, the trio is chasing lofty goals — 80 percent conversion efficiency and the ability to concentrate sunlight to intensities up to 2,000 times the natural levels.

The major upside to this kind of solar power — High Concentration PhotoVoltaic Thermal (HCPVT) – is that it cuts down on the surface space of the photovoltaics (and hence the amount of pricey rare earth elements needed).  Stumbling blocks include the inherent complexity of designing the concentrating mechanics and the maintenance concerns.

The prototype device is a multi-facet parabolic dish, whose mirrors track the sun.  The mirrors beam the concentrated sunlight onto multiple microchannel-cooled 1 centimeter x 1 centimeter chips, each of which can produce between 200 and 250 watts on a sunny day.  100+ of the chips are combined to produce around 25 kilowatts of power per dish.   Professor Aldo Steinfeld of ETH Zürich is using advanced ray tracing simulations to craft the control algorithms to precisely precision the mirrors for maximum harvest.

But the microchannels are where the greatest “magic” happens.  Versus the passive air cooling of some previous concentrating solar systems, the microfluidic system is just tens of micrometers away from the chips, allowing them to stay virtually unheated at 2,000 times sunlight, according to the project team.  The system can concentrate up to 5,000 time sunlight without melting.

II. Microfluidics Research is Paying Off for IBM

This is the second major project where IBM and ETH Zürich are teaming up to use the new microfluidic system, which was originally designed at the Egypt Nanotechnology Research Center.  The pair is also working to build a supercomputer — dubbed Aquasar — based on the new cooling tech.

The researchers hope to deploy the system at a cost of under $250 USD per square meter, and at a cost-per-kilowatt-hour of <$0.10 USD/kWh.  That would be pretty incredible, given that coal power is currently $0.05-0.10 USD/kWh in many regions.

A key to cutting the cost is that only the chips/controllers/and motors are manufactured offsite.  Airlight CTO Andrea Pedretti describes, “The design of the system is elegantly simple.  We replace expensive steel and glass with low cost concrete and simple pressurized metalized foils.”

Better yet, the team hopes to use the cooling system to provide fresh drinking water.  The water heats to 90ºC in the microfluidics, vaporizing.  It then passes through a series of porous membranes that block salt, leaving only fresh water.

Generating drinking water would reduce the capacity of the system, but researchers estimate the system could produce 30-40 liters of drinkable water per meter, per day, while still producing 2 kWh of power per day per meter (roughly a 25 percent efficiency).  Thus roughly two meters of dishes could produce enough water daily to sustain one person.

The thermal system also can be hooked up to an absorption chiller, which replaces energy-intensive compression chillers (which often use ozone-depleting fluids).  The chiller uses silica gel to achieve a unique cooling thermal cycle.

The combination of cleaning drinking water, cooling, and power production — three crucial needs of desert regions — make this solar system a seemingly promising one.  With prototypes currently under testing in Switzerland, the team hopes to soon see it deployed to regions like the southern Europe, Africa, Arabic peninsula, the southwestern part of the United States, South America, and Australia.  The team also expects its lightweight, cost-effective nature will make it a promising solution for tropical island tourist destinations.