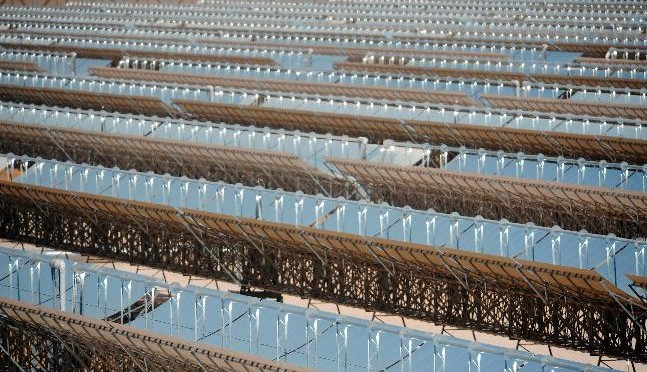 Oil-rich Abu Dhabi on Sunday officially opened the world’s largest Concentrated Solar Power (CSP) plant, which cost $600 million to build and will provide electricity to 20,000 homes.
The 100-megawatt Shams 1 is “the world’s largest concentrating solar power plant in operation” said Sultan al-Jaber, the head of Abu Dhabi’s Masdar, which oversees the emirate’s plan to generate seven percent of its energy needs from renewable sources by 2020.
“Today, Shams 1 is the largest CSP plant in all terms,” said Santiago Seage, chief executive officer of Abengoa Solar, one of the partners in the project.
CSP uses a system of mirrors or lenses, whereas many other solar plants around the world use photovoltaic technology to harness solar power.
Masdar now produces 10 percent of the world’s concentrated solar power, Seage said during the official inauguration.
The company’s energy portfolio represents 68 percent of renewable energy produced in the Gulf region, where clean energy remains at an infancy stage. 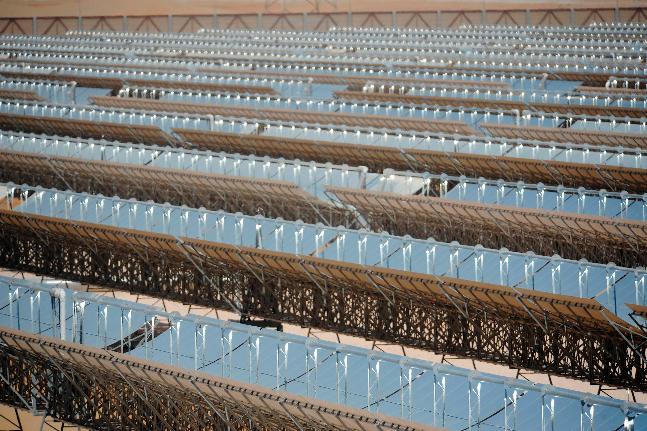 A section of solar power plant Shams 1 is seen during the official inauguration, at Madinat Zayed in Abu Dhabi March 17, 2013.
The largest renewable energy project in the Middle East, Shams 1, covers 2.5 square kilometres in Madinat Zayed in the Western Region, and will generate 100 megawatts of clean and sustainable energy – enough to power 20,000 homes, and the biggest step so far towards Abu Dhabi’s goal of obtaining 7 percent of its energy from renewable sources by 2020.
The solar thermal park features long lines of parabolic mirrors spread over an area equivalent to 285 football pitches in the desert of the Western Region, some 120 kilometres (75 miles) southwest of Abu Dhabi.
The 192 rows of loops collect heat that drives turbines to generate power that would save 175,000 tonnes of carbon dioxide every year, equivalent to taking 15,000 cars off the road. Automatic trucks are deployed to dust the mirrors in this desert location where sand poses a serious challenge to the efficiency of heat collectors.
Masdar owns 60 percent of the project, while France’s Total and Spain’s Abengoa Solar own 20 percent each. Abu Dhabi is the wealthiest of the seven sheikhdoms that make up the federation of the United Arab Emirates. It sits on proven oil reserves totalling 98.2 billion barrels