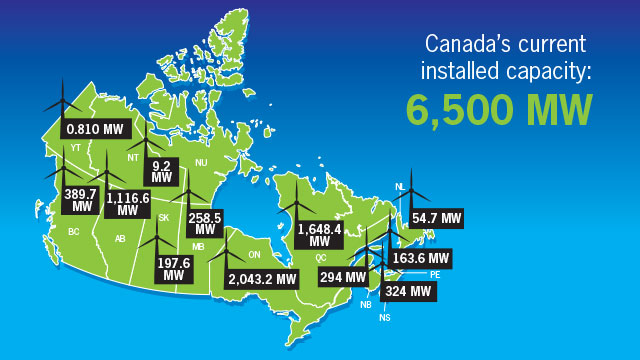 Wind energy is one of the fastest growing major sources of new electricity around the world.

Every Canadian province is now benefitting from clean wind energy.

Wind energy is growing in more than 90 countries around the world at an average annual rate of more than 25 per cent a year because governments, citizens and electricity system operators alike have found a reliable, clean, and safe form of energy … and at a good price.

The balance of scientific evidence and human experience to date clearly concludes that wind turbines are not harmful to human health – in fact, wind energy reduces harmful air emissions and creates no harmful waste products when compared with other sources of electricity.

Shifting from conventional forms of thermoelectric energy production (e.g. nuclear or coal) towards renewable technologies such as wind energy, will reduce water demand.

A 150 MW wind farm uses 480 million litres less water each year than a natural gas facility of the same size. That’s equivalent to the volume of 160 Olympic sized swimming pools.

The IEA recently stated that worldwide, the energy system is thirsty: in 2010, 66 billion cubic meters of water are consumed, and projected to increase consumption by 85 per cent by 2035 – increased use of wind energy will help to reduce our growing thirst for fresh water in the energy sector.

A 2011 report by the Union of Concerned Scientist ‘Freshwater Use by U.S. Power Plants’ found that “On average in 2008, plants in the U.S. nuclear fleet withdrew nearly eight times more freshwater than natural gas plants per unit of electricity generated…” and that “wind farms use essentially no water.” The report also states that a nuclear plant with recirculating cooling water withdraws 800 to 2,600 gallons per megawatt-hour but consumes 600 to 800 gallons—roughly half the amount withdrawn (Macknick et al. 2011). Recirculation cooling systems result in consumption of water through evaporation, which takes water away from its original source, and is therefore unavailable for other uses.

The wind energy industry is deeply committed to protecting wildlife and the natural environment by siting wind farms with respect for all habitats. The industry partners with academic leaders, researchers, regulators and wildlife organizations to ensure development of wind energy is respectful and responsible.

Birds: Project developers ensure there are mechanisms in place to reduce potential risks and to aid in furthering our understanding of actual impacts on avian species – both prior to and following commissioning of wind energy projects.

Wind turbines are powered by wind, producing no greenhouse gasses or air pollution as they generate electricity.

Wind farms and the agricultural community are productive partners.

As little as one per cent of total acreage is needed for wind turbines and access roads. The remaining acreage is free for other uses, such as farming or ranching.

The power sector is one of the world’s biggest consumers of water, but wind energy uses virtually no water to produce electricity, except for minimal and occasional use for washing turbine blades or keeping dust down on access roads.

Canadians have a new way to join the dialogue on wind energy with the official launch today of www.windfacts.ca – a website that combines cutting-edge social media tools with facts, figures, did-you-knows, and links to important resources.

The initiative is supported by wind energy leaders whose goal is to ensure Canadians have access to facts when making choices about their energy future, and the site is administered by the Canadian Wind Energy Association (CanWEA).

The WindFacts website contains facts and resources that address a number of areas of key interest to Canadians: how wind works, health, community, affordability and environment and wildlife. By logging in through top social media programs such as Facebook, Twitter and LinkedIn, visitors can also submit questions about wind energy which will be answered by the WindFacts Team.

“Wind energy enjoys high public support from coast to coast, but it’s natural for Canadians to have questions about how various forms of energy may impact their consumer bill, the environment, and what sort of benefits it can deliver to local communities,” said Chris Forrest, CanWEA vice-president of communications and public affairs. “Every province is now producing clean wind energy, but most provinces are only in the early days of modernizing and upgrading their electricity system. Renewable energy sources work together to generate reliable power without polluting our air or contaminating our water, and can deliver significant economic benefits at a very local level. We look forward to continuing the clean energy dialogue with Canadians.”

Visit www.windfacts.ca today to get the facts on wind energy and join the conversation.