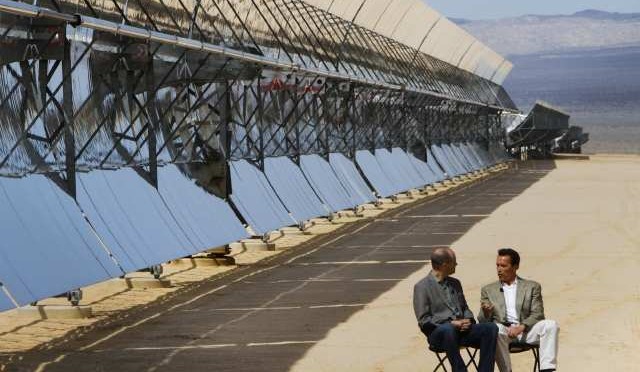 Fitch Ratings has affirmed the ratings and Outlooks on a total of $852 million of debt issued by Genesis Solar LLC (Genesis) as follows:
–$561.6 million 3.875% series A trust certificates (U.S. Sovereign Guaranteed), due 2038 at ‘AAA’; Outlook Negative;

–Robust Completion Terms: Fitch considers it very unlikely that any completion issues would affect bondholders and lenders. The Construction Completion Agreement (CCA) between the sponsor, NextEra Energy Resources, LLC, and Genesis effectively mitigates construction risks by requiring a full or partial buy down of the project debt if project economics are compromised by a lack of completion. The CCA is guaranteed by the sponsor’s parent, NextEra Energy Capital Holdings, Inc. (A- with a Stable Outlook).

–Experienced CSP Operator: Genesis features solar parabolic trough technology that is very similar to the Solar Energy Generating Systems (SEGS), which the sponsor has been operating for over 20 years. The sponsor’s familiarity with concentrating solar power (CSP) technology is a credit positive toward reducing operating performance and cost uncertainty.

–Considerable Financial Coverage: The rating is supported largely by a sizable financial cushion in debt service coverage built into the financial structure, prompted by a high level of contributed equity and consequently low leverage on the transaction relative to peers. The Fitch rating case indicates a debt service coverage ratio of 2.42x, consistent with similarly rated peers.

–Rating downgrade of the U.S. sovereign rating, based on loan guarantees for 80% of the rated debt.

–Rating downgrades of the parent, NextEra Energy Capital Holdings, Inc., based on construction guarantees, or the PPA provider, PGE, based on revenue contract reliability.

–Operating costs higher than the original projections by 10% or more.

Collateral for the debt includes all of the ownership interests in Genesis and a first priority security interest in all of the project assets and accounts.

Genesis has endured various construction obstacles in a pro-active manner over the 18 months since financial close of the debt, and Fitch expects the project ultimately to be completed without diminishing credit quality. Fitch takes comfort in the robust CCA and parent guarantee that effectively mitigates delay liquidated damage penalties, as well as any potential cost overruns beyond the standard construction contingency built into project costs.

The cushion between the target and guaranteed commercial operation date (COD) for Unit 2 has compressed from six months to one month, which Fitch views as unusually tight. The unit is targeted to come online in the beginning of November 2013, while guaranteed COD is at the end of the month. Based on additional liquidity provided under the CCA, Genesis liquidity effectively matches the damage payments required. The independent engineer reported to Fitch that construction progress to date has been appropriate to maintain the COD forecast date.

Total project spending of $1.2 billion is under-budget as of Jan 31, 2013, compared to a budget spending forecasts by the same date. Genesis attributes the slow-down in expenditures primarily to:

–Construction grading restrictions at parts of Unit 1 due to the unearthing of cultural artifacts;

–Power back-feed delay from SCE’s substation to Genesis due to utility scheduling issues;

–Engineering delays due to redesign of some construction plans;

The agility of Genesis to adjust construction activities based on construction issues is a favorable mitigant to completion risk. After an extended work restriction began in late 2012, isolated to various blocks at Unit 1, construction on Unit 2 was accelerated. As a result of consistent work on Unit 2, Genesis swapped COD dates among the units so that Unit 2 is now expected to meet the first scheduled COD in November 2013 in place of Unit 1.

Genesis also reached agreements with the U.S. Bureau of Land Management, the California Energy Commission, and local native tribes to construct its parabolic trough solar field to avoid two artifact locations in Unit 1. Grading and trough foundations at both Unit 1 and Unit 2 construction sites have been completed, and parabolic trough foundations have been built around the area where artifacts were found, limiting Fitch’s concern about additional schedule changes due to additional artifact findings.

Genesis is a total 250 MW parabolic trough solar project located in the Sonoran Desert, California. The project received debt guarantees from the U.S Department of Energy under the Financial Institution Partnership Program in August 2011. The project is comprised of two, distinct 125 MW solar fields (Unit 1 and Unit 2) which are being built in succession. The two units are expected to be fully operational by April 2014.

Additional information is available at ‘www.fitchratings.com‘. The ratings above were solicited by, or on behalf of, the issuer, and therefore, Fitch has been compensated for the provision of the ratings.