Talking to EWEA at the 2013 Annual Event in Vienna this week, he said that slow administrative processes act as a “brake” but not a “block” on wind power investments.

He also spoke in favour of a more integrated power network with Europe, saying “We want to fully integrate the Turkish transmission system to the European network so that trade becomes easy.”

Turkey is one of the most promising – and ambitious – countries for wind energy, with a target of 20 GW by 2023, up from 2 GW today. Yet Deputy Minister Mercan said that while wind energy did have public support, there have been small communities in Turkey which have strongly opposed wind energy developments. He stressed the need to “improve knowledge of clean energy”. 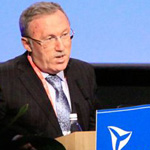 The latest issue of EWEA’s magazine Wind Directions takes a closer glance at four of these key markets: Turkey, Poland, Romania and Hungary.