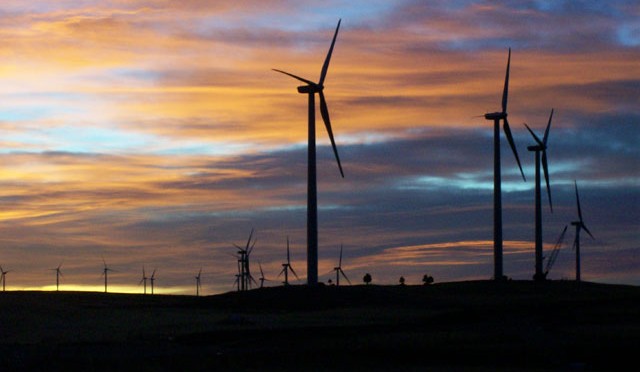 The Daily Caller’s Michael Bastasch recently reported on a faulty report filed by the Pacific Research Institute (PRI). PRI is a think tank with ties to fossil fuel industry-funded groups like the Koch brothers and the American Legislative Exchange Council (ALEC).

The report’s author, Benjamin Zycher, has had his anti-wind misinformation debunked before.

Perhaps most telling is that the California government body responsible for protecting consumers from electricity price increases is not concerned about renewable energy increasing the price of electricity. As noted in a recent press article, “The [California Public Utilities Commission’s] Energy Division has been working on a five-year rate forecasting project and found that, overall, utility rates are expected to increase by just 2 to 3 percent a year over the next five years. “This tracks inflation,” said Terrie Prosper, a spokesperson for the PUC. “The drivers of the rate increase are the general need for infrastructure improvements, most of which would be needed even if there was not a (renewable energy) mandate.”

Even with his grossly inflated cost numbers for renewables, Zycher himself acknowledges that renewable energy will be a small contributor to the gradual increase in electricity rates California consumers are likely to face over this decade: “Dr. Zycher added that California power rates are very likely to rise by almost 20 percent even in the absence of the costs imposed by the 33 percent RPS requirement, due to the prospective need for various capital investments driven by both economic and regulatory factors.” Even with his fabricated and deeply flawed math, Zycher is only able to argue that the act of obtaining 33% of California’s electricity from renewable energy will account for only 2/5 of the modest rate increases that are expected for California consumers. Even with Zycher’s faulty math, the renewable-related increase amounts to less than 2% per year, comparable to the rate of inflation. By comparison, national electricity prices increased by 5-6% per year over the comparable period last decade, thanks to the skyrocketing price of fossil fuels. By reducing its reliance on volatilely-priced fossil fuels, California is wisely protecting itself from such price increases in the future.

The flaws in Mr. Zycher’s math are obvious once one takes a closer look:

Mr. Zycher begins with Department of Energy (DOE) data that, as explained below, do not reflect recent cost declines for renewable energy. In addition, these national average costs do not accurately reflect the costs of electricity generation in California. For example, due to once-through cooling requirements and other environmental restrictions, natural gas combined cycle plants in California are likely to be far more expensive than indicated in the DOE data.

The DOE numbers also assume that natural gas prices will stay low. If that does not occur, the price of natural gas-generated electricity will be much higher. In Table 1, Mr. Zycher even acknowledges that 2/3 of the cost of natural gas combined cycle electricity is made up of variable costs, which are nearly all fuel costs (this is why wind’s variable costs are zero in the table). If natural gas prices increased from their extreme lows, any relative costs for wind would disappear and become relative savings. This highlights one of wind energy’s greatest values: its ability to protect consumers from volatility in the price of fuels.

Real-world data confirm that wind energy’s costs are far lower than those claimed in the report, even before Mr. Zycher inflates the cost of wind energy by 50% for unjustified reasons.

·       Lazard Levelized Cost of Energy V 6.0: According to Lazard, one of the world’s preeminent financial advisory and asset management firms, renewable energy is already cost competitive with conventional energy resources in many markets. Renewables are beginning to match or beat fossil-fueled electricity on price, and with continued growth, deployment and innovation, renewables are becoming more widespread every day.

·       In the words of David Eves, president and CEO of Public Service Co. of Colorado (PSCO), an Xcel Energy subsidiary, “[… R]enewable energy can compete on an economic basis with more traditional forms of generation fuel.”

·        In 2011, Alabama Power, a subsidiary of Southern Company, made its first wind power purchase. In signing off on the contract, the state Public Service Commission noted that the “price of energy from the wind facility is expected to be lower than the cost the company would incur to produce that energy from its own resource … with the resulting energy savings flowing directly to the Company’s customers.”

·       In Colorado, in a late?2011 order approving a wind power purchase by Xcel Energy, the state Public Utilities Commission stated that “the contract will save ratepayers $100 million on a net?present?value basis over its 25?year term under a base?case natural gas price scenario” while providing the opportunity to “lock in a price for 25 years.”

·       In early 2012, American Electric Power subsidiary Southwestern Electric Power Co. (SWEPCO) signed long?term power purchase agreements for a total of 358.65 MW from wind projects in Texas, Oklahoma and Kansas. SWEPCO said in a news release that it estimated an average decrease in cost to its customers of about 0.1 cents per kilowatt?hour over a 10?year period starting in 2013.

·       When the Midwest grid operator recently obtained more than 25% of its electricity from wind, it noted that “Wind represents one of the fuel choices that helps us manage congestion on the system and ultimately helps keep prices low for our customers and the end-use consumer.”

·       The Public Utilities Commission of Texas has also noted the benefit wind energy provides to consumers, explaining in its annual report to the Texas legislature that “For each additional 1,000 MW of wind that was produced, the analysis showed that the clearing price in the balancing energy market fell by $2.38.”

All data indicates that wind energy is keeping electric bills low for consumers. When the wind is blowing and wind energy is being added to the utility system, it displaces the most expensive power plants first, so even modest additions of wind energy cause significant reductions in the electricity prices paid by homeowners and businesses.

·       A May 2012 report by Synapse Energy Economics found that adding wind energy in the Midwest would save the average homeowner between $63 and $200 per year. Wind energy also protects consumers from volatility in the price of fossil fuels, much like a fixed-rate mortgage protects consumers from interest rate fluctuations. Energy Information Administration data confirms that electricity prices in the states with the most wind energy have risen more slowly than in states that have not developed wind energy.

At least Mr. Zycher’s fabricated “wind backup” cost of $12.50/MWh is lower than the $368/MWh (!) he claimed less than a year ago. Reducing his made-up cost by a factor of 30 is a good start, though he’ll need to reduce it again to get closer to reality.

The California grid operator’s own data confirms that the incremental cost of integrating 33% renewables is near zero, particularly relative to the integration costs of conventional generation. For more on those studies, read “Fact check: LA Times has faulty analysis on costs of integrating renewables.”

Analysis conducted for the CAISO earlier this year documents that the reserve needs in a 33% renewable energy future are only slightly higher than in the status quo, and that large fossil and nuclear power plants impose a reserve requirement that is a dozen times larger.

The CAISO February 2012 analysis compared the reserve needs and challenges associated with reliably accommodating two different generation mixes for the state. In one scenario, all of the state’s electricity needs were met with natural gas, while in the other scenario 33% of California’s electricity was obtained from renewables.

Analysis of data in the report indicates that moving to a 33% renewable system from an all-gas system causes a 3-4% increase in total system reserve costs. In 2010, all of these reserve costs accounted for less than 1% of the total cost of energy in the California electricity market. Therefore, on an average household’s monthly electric bill of $100, the increase in reserve costs in the renewables case would work out to an increase of around 3-4 cents!

This addition of an inflated cost is made even more egregious by the fact that upgrades to the nation’s obsolete and congested electric grid are needed anyway regardless of the addition of wind energy, and all studies indicate that these grid upgrades more than pay for themselves by providing consumers with access to lower cost generation, improving the efficiency of the grid, and increasing competition in electricity markets.