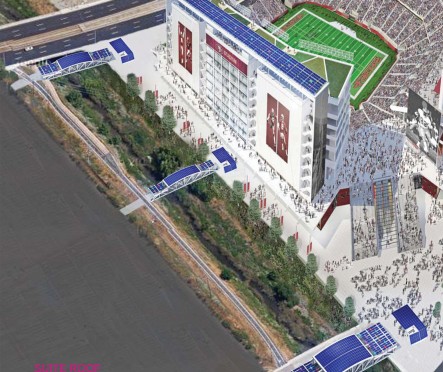 Through this unique partnership, NRG will help the new facility become the first professional football stadium to open with LEED certification, the recognized standard for measuring building sustainability.

As one of the first Founding Partners for the new stadium, and the exclusive sustainable energy provider of the 49ers, NRG will install a number of state-of-the-art solar elements, including three solar array-covered bridges, a solar canopy above the green roof on the suite tower portion of the stadium and solar panels over the 49ers training center.

The arrays will have a total peak capacity of about 400kW and will provide enough power over the course of a year to offset the power consumed at the stadium during 49ers home games. As a result the stadium will be the first professional sports venue in California to achieve net zero energy performance.

“NRG is much more than a Founding Partner, they are providing the energy leadership, infrastructure and expertise to help us achieve the vision of making the new Santa Clara Stadium an economically and environmentally sustainable showcase for innovation,” said Jed York, Chief Executive Officer, San Francisco 49ers. “As we strive to build a stadium that embodies all that is unique and special about both the Bay Area and Silicon Valley, this partnership with NRG will make very lofty goals become realities.”

The new stadium in Santa Clara is the next generation of stadium design. One of the most unique features of the facility is the green roof atop the suite tower on the west side of the stadium. The three solar bridges, connecting the main parking area to the stadium, will include hundreds of solar panels. In keeping with NRG’s philosophy of creating iconic solar elements at NFL stadiums, the solar bridges will be the first in the NFL.

“The 49ers are not only one of the leading and most successful franchises in the history of the NFL, they have also been for decades community leaders in the Bay Area and with the entire 49ers fan base. Today and going forward, we are honored to support the 49ers as they extend their off-the-field community leadership into the critically important arena of clean and sustainable energy,” said David Crane, President and CEO of NRG Energy. “And NRG is proud to partner with the San Francisco 49ers and the Santa Clara Stadium Authority in the pursuit of another milestone, the LEED certification of their new stadium.”

In addition to the solar array, the stadium’s green initiatives include public transit access, convenient bicycle parking, a walking path from the San Tomas Creek Trail, water-conserving plumbing fixtures, recycled materials and a long list of other sustainable design elements.

As the sustainable energy partner of the 49ers, NRG will continue to explore other opportunities to help enhance the stadium’s sustainability efforts such as installing electrical vehicle charging stations to the new stadium. NRG is currently building the nation’s first comprehensive, privately funded electric vehicle charging network.

NRG, the nation’s largest competitive power generator is a leader in providing safe and reliable energy solutions in new and innovative ways to American businesses and consumers. It is also the largest solar power company in the United States with more than 900 megawatts of solar generation in operation or under construction.

The Santa Clara stadium will not only be the new home to the San Francisco 49ers, but it will also serve as one of the world’s best outdoor sports and entertainment venues. It was designed by HNTB and is being built by Turner/Devcon. The $1.2 billion venue will have 1.85 million square feet, seat approximately 68,500 and will feature an expected 165 luxury suites and 9,000 club seats. It was designed to be a multi-purpose facility with the flexibility to host a wide range of events, including domestic and international soccer, college football, motocross, concerts and various civic events, and will be expandable for major events such as the Super Bowl. For more information, go to www.newsantaclarastadium.com.

NRG is at the forefront of changing how people think about and use energy. We deliver cleaner and smarter energy choices for our customers, backed by the nation’s largest independent power generation portfolio of fossil fuel, nuclear, solar and wind facilities. A Fortune 300 company, NRG is challenging the U.S. energy industry by becoming the largest developer of solar power, building the first privately-funded electric vehicle charging infrastructure, and providing customers with the most advanced smart energy solutions to better manage their energy use. In addition to 47,000 megawatts of generation capacity, enough to supply nearly 40 million homes, our retail electricity providers – Reliant, Green Mountain Energy and Energy Plus – serve more than two million customers. More information is available at www.nrgenergy.com.