But they don’t appear to be the batteries of the future. For one thing, they batteries themselves require extensive casings because of their tendency to catch fire when exposed to water or air. Not to mention the fact that a battery leak could be toxic.

Because of that, there are size restrictions on objects that contain them. Even the smallest and lightest laptops around cannot be much smaller because of the solid, sizable batteries that make them run.

And then there’s the limited life and extensive charge time. For cell phones and laptops, this isn’t such a big deal (though battery life could always be longer), but for electric vehicles, whose range depends on battery life and whose charge time is important for travel, it’s becoming a dilemma.

Battery companies and engineering laboratories have been working on developing batteries that can replace the lithium-ion battery. For electric vehicles, the focus is a longer range and shorter charge time.

For gadgets – particularly wearable gadgets – the goal is to make something smaller, sleeker, and more durable.

And that’s where Imprint Energy comes in.

Founded in 2010 and headquartered in Alameda, California, Imprint Energy grew out of research from the University of California, Berkeley.

Christine Ho and Brooks Kincaid were both PhD candidates at the time the company was founded, and they were dedicated to developing a new form of battery that removed the toxic, combustible lithium from the equation. 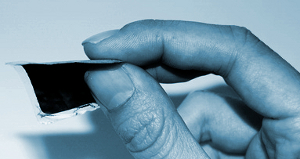 They called their battery Zinc Poly™. Unlike other zinc batteries, which are prevented from recharging by the dendrites that grow as a result of the zinc’s reaction with a liquid electrolyte, the Zinc Poly™ uses a solid electrolyte so it is able to recharge.

And though it won’t sustain a high-powered electric car, it is ideal for wearables. The battery is very thin, flexible, and very energy dense – storing up a lot more power in a smaller footprint than a lithium battery could.