In the well known Greek myth, Icarus, attempting to fly with wings that his father had constructed from feathers and wax, ignores instructions not to fly too close to the sun, the wax melts and he falls into the sea and drowns. If the wind industry is to develop its full potential, it must ensure that the wings of its turbines are technologically advanced enough for them to be viable producers of energy both economically and sustainably. Feathers and wax will not do. Only the continuous improvement of rotor blades will allow the sector to tap into more moderate wind speed markets and enable off-shore wind farms to become truly cost effective.

Siemens has already become somewhat of a leader in this field producing the world’s longest rotor blades for wind turbines. Measuring 75 meters in length, the blades are almost as big as the wingspan of an Airbus A380. As they move, each rotor covers 18,600 square meters, the size of two and a half soccer fields, while the tips of the blades move at up to 80 meters per second, the equivalent of 290 kilometres per hour, states the company proudly.

The entire blade is poured as a single piece made of glass fibre-reinforced epoxy resin and balsa wood, meaning the final product has neither seams nor bonded joints and is extremely robust. At the same time, the blade weighs 20 per cent less than conventionally produced blades through the use of specially designed blade profiles that are also shaped to deliver maximum rotor performance at a range of different wind speeds.  Whereas the first wind turbines generated 30 kilowatts and had five-meter-long rotor blades, the latest turbines can produce six megawatts of power, extols Siemens.

GE, Virginia Polytechnic Institute & State University (Virginia Tech),and the US National Renewable Energy Laboratory (NREL), believe their plans could put wind energy on an equal economic footing with traditional fossil fuels. They want to create an advanced wind blade using architectural fabrics, which would be wrapped around a metal frame, resembling a fishbone. The fabric would be tensioned around the ribs which run the length of the blade and are specially designed to meet the demands of wind blade operations. Conventional wind blades are constructed out of fibreglass, which is heavier and more labour and time-intensive to manufacture. This new blade design could reduce blade costs by 25-40 per cent, making wind energy as economical as fossil fuels without government subsidies, says GE. 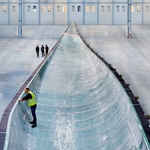 But it is not just the big companies that investing in wind blade technology. A Tunisian start-up company called Saphon Energy has designed a wind-capturing device that eschews the windmill form factor in favour of a simple disc-shaped sail that catches and dances in the breeze. Meanwhile, in an effort to reduce waste and improve recyclability, the US National Science Foundation (NSF) has given $1.9 million to the University of Massachusetts and the University of Wichita to investigate whether a form of bio-based plastic made from soybean, linseed and other vegetable oils, plus cellulose fibres, could form the next generation of blades.