Once again, a moribund global economy defined the year as politicians around the world tried to get ahead of the stubborn financial and debt crisis.

And yet, for the European wind industry, 2012 included a signature achievement when, in late September, it was announced that the EU had passed the milestone of 100 gigawatt (GW) of installed wind power capacity. This can generate enough electricity over a year to meet the total consumption of 57 million households, equivalent to the power production of 39 nuclear power plants.

The year was also significant for the European Wind Energy Association (EWEA) which celebrated its 30th anniversary of guiding the wind energy sector in its transition from an alternative to a mainstream power source.

EWEA also announced that Thomas Becker would become its new Chief Executive Officer when Christian Kjaer, after seven years in the top job, steps down early in 2013.

Like almost all other sectors, the wind power industry was not immune to the economic woes that swirled about in 2012.

Despite that, wind power continued growing as policy makers and investors realised its important role at the pivotal intersection of the economy, energy supply and the environment.

With that in mind, EWEA distills some of 2012’s most important wind-power-related news, as recorded in the association’s blog.

Fatih Birol, the chief economist at the International Energy Agency, said “fossil fuel subsidies are a hand brake as we drive along the road to a sustainable energy future. Removing them would take us half way to a trajectory that would hold us to 2C.”

Tapping into the vast potential of America’s wind power and solar industries while also increasing the nation’s traditional domestic energy supplies formed a major part of US President Barack Obama’s annual State of the Union address.

A PriceWaterHouse Cooper report revealed that global renewable energy deals hit a record high of $53.5 billion in 2011 – compared to $38.2 billion in 2010.

Electricity from wind energy and other renewables is close to one-third cheaper than electricity from a new coal-fired plant, according to a US report.

People can expect a catastrophic 50% global increase in greenhouse gas emissions and worsening air pollution by 2050 unless politicians rapidly work together to find sustainable growth policies, a new report by the OECD found.

Asia will continue to drive global wind power growth during the next few years, the European market will remain solid but the North American market will be uncertain, Steve Sawyer, Secretary General of the Global Wind Energy Council, predicted.

Europe could save €20 billion on fuel costs, improve its air quality and create up to 1.5 million new jobs by moving to a higher climate target for 2020, according to an EC report.

Britain’s onshore wind farms supported 8,600 jobs and were worth €680 million to the UK economy in 2011, a government-backed study found.

Japan firmly shifted its future energy profile towards renewable energy and away from nuclear power following the Fukushima reactor disaster.

July
European MEPs rejected a proposal that would have allowed public subsidies to be spent on fossil fuel infrastructure projects under the European Regional and Development Fund.

Denmark met 26% of its electricity demand with wind power in 2011, confirming its pole position as a beacon for wind energy as well as for its ability to integrate renewable electricity into the grid.

Responding to a proposed national study by Health Canada on wind turbine sound and human health, six wind energy associations pointed to 17 reviews of independent research that all conclude wind is not harmful to human health.

The Sierra Club, the largest grassroots environmental organisation in the US, said renewable energy’s strong growth over the past decade has made it a target for unprecedented new attacks from oil, coal, and gas interests.

A new US scientific study revealed that wind energy’s vast potential could more than meet humankind’s escalating power needs throughout the 21st century.

An international group, Oceana, came out with a report saying the rapid increase in greenhouse gas is threatening ocean-based food security because of acidification.

Hundreds of defects have been detected in nuclear power stations across Europe, according to a European Commission report and fixing the faults could run up a bill of €10-25 billion.

An announcement by Bloomberg New Energy Finance that says the costs of onshore wind farm operations and maintenance continue to fall rapidly is further proof that the electricity-generating technology is both affordable and dependable.

Wind power and other renewables will become the world’s second-largest source of power generation by 2015 and close in on coal as the primary source by 2035, according to the International Energy Agency. 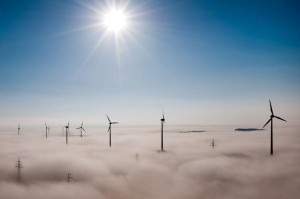 The annual UN climate change meeting ended in Doha without any new targets for reducing global greenhouse gas emissions and no binding plan to keep global temperature rise to no more than 2 degrees Celsius. Negotiators did agree to extend the Kyoto Protocol which includes only some developed nations, from 2013 to 2020.

Offshore wind farms can create a host of benefits for the local marine environment, as well as combatting climate change, a new study by the Marine Institute at Plymouth University found.