Europe’s energy infrastructure urgently needs updating. In this interview published in the latest edition of EWEA’s Wind Directions magazine, Ana Aguado, CEO of Friends of the Supergrid, explores how this can be done.

What is the supergrid and why do we need it?

We define the supergrid as “a pan-European transmission network facilitating the integration of large-scale renewable energy and the balancing and transportation of electricity, with the aim of improving the European market”.

With such a definition it is stated quite clearly that in order to transform our energy systems to one that is based on clean and indigenous resources there is no other way but to build a European high voltage network able to integrate all those renewable energy sources, cope with their variability and transport electricity over long distances. We call such an EU planned network the supergrid.

What are the three main barriers lying in the way of the supergrid?

A lack of the necessary strong political support at EU level, existing differences in the electricity regulatory frameworks of the Member States, and, as a consequence of the two previous points, a lack of incentives to investors.

Do we yet have the technology to deliver a supergrid?

Yes, we can start the supergrid in the North Sea by building supernodes: Alternating Current (AC) is used to collect the energy from offshore wind parks and then Direct Current (DC) to transmit this energy to distant load centres. We then convert back to AC for connection to existing transmission systems. We propose to do this using many supernodes connected in a DC grid to allow multidirectional power flows depending on supply and demand.

One of your stated aims is “improving the European market” what does this mean? Will consumers benefit?

One of the reasons why Europe can still not benefit from a single electricity market is due to the lack of necessary infrastructure. Moreover, much necessary infrastructure hasn’t been built in the last 15 years partly due to public opposition. Citizens and consumers in Europe were not very in favour of the idea of building high voltage networks for the sake of trade or the removal of grid congestion. Conventional power stations can be built close to consumption zones and the general benefits that a single market can bring thanks to transmission are too vague to be appreciated by consumers. However, the supergrid means a transformed energy system where clean and indigenous energy sources will be used, it means local employment and increased GDP, it means combating climate change and secure and independent energy supplies. All these benefits to consumers are in my view more tangible. Consumers need to understand that in order to exploit our renewable energy sources there is no other way than the supergrid.

The European Commission has said it wants a single market in electricity by 2014 – is that goal realistic?

No, it cannot be since the necessary investments in transmission networks in Europe have not been made in the last 15 years. The regulatory frameworks will certainly evolve in the right direction by 2014 but it will not be sufficient for a single market. 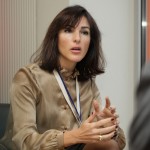 If you could look-ahead to 2020, then 2030 and finally 2050, how would you describe Europe’s electricity infrastructure and market at those points?

If we really wish to decarbonise the power sector and the European economy as much as 90% by 2050 the necessary steps should be taken now. Investments related to energy in general and to infrastructure in particular are by definition long-term. The networks or generation units built today will last in most cases for at least 40 years; and nobody wishes to have stranded assets at a certain moment. But decarbonising means a completely different way in planning the networks and certainly in the generation sources to be used. I therefore see new targets for renewables by 2030 and beyond if still necessary and the first phases of the supergrid being built by 2020 or right after.

If you are keen to learn more about the supergrid, look out for Ana Aguado’s session at EWEA 2013 in Vienna from 4-7 February. More information: www.ewea.org/annual2013