A new study has hit the headlines claiming that “wind turbines can ruin a good night’s sleep,” as the UK’s Daily Mail put it. It is apparently the first study to clearly link wind farms to sleep problems for those living in proximity.

Scratch a little deeper and you might find that the study – based on a questionnaire given to two sets of adults in Maine, USA, one living near a wind farm and one not – is not quite as conclusive as it first might seem.

First, the sample size is small, “twenty-three and 15 adults at the Mars Hill and Vinalhaven sites respectively, completed the questionnaires. Recruitment of participants into the far group continued until there were similar numbers as in the near group, 25 and 16 for Mars Hill and Vinalhaven, respectively,” the study itself says. Secondly, “it was clear to the respondents that the questionnaire was directed at investigating adverse health effects potentially associated with IWT [Industrial Wind Turbines] and no distractor questions were included,” again quoted directly from the study.

Meanwhile, the study was based on a questionnaire alone given to residents: “participants were asked before-and-after IWT questions about sleep quality and insomnia, attitude towards IWTs, and psychiatric disorders,” the study says. No sound measurements were made during the study, so it is not clear what sound levels the residents experienced, which, for a study investigating wind turbine noise, is odd to say the least.

And, according to rebuttals posted on question-and-answer website Quora, the study was carried out by “long-time anti-wind lobbyists” and appears to have been “peer-reviewed by professional anti-wind testifiers.”

Meanwhile, you may be interested to note that an increasing body of evidence exists showing that there is no link between wind turbines and adverse health effects. In 2010 the Australian Government National Health Medical Research Council concluded: “there are no direct pathological effects from wind farms and that any potential impact on humans can be minimised by following existing planning guidelines.” In January 2012 a study for the Massachusetts Department of Public Health said: “there is insufficient evidence that noise from wind turbines is directly…causing health problems or disease.” There are many more studies, some of which have been reviewed on this blog here and here. 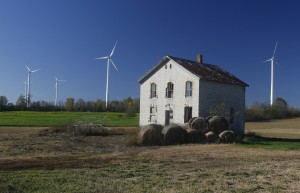 As Robert Hornung, President of the Canadian Wind Energy Association, put it: “wind has also been attacked by opponents on the grounds that it is harmful to human health. This is despite the fact that the balance of scientific evidence clearly shows that wind turbines do not adversely affect human health, and in fact, wind energy is broadly recognised to be one of the safest forms of electricity generation available today.”