According to unaudited financial statements prepared in accordance with the People’s Republic of China accounting rules and standards, the Group generated revenues of RMB 5,946.28 million, net profits of RMB48.49 million,and basic earnings per share of RMB 0.01 during the reporting period.

Goldwind’s performance during the first three quarters of 2012 fell within the expected range as announced in its 2012 Interim Report.

Ms. Ma Jinru, vice president, Secretary of the Board, and Company Secretary of Goldwind, said:“Goldwind reported gross profit and margin of RMB 887.60 million and 14.9% during the nine months ended 30 September 2012. On a quarterly basis, the Group reported a sequential improvement in gross profit to RMB 406.56 million in 3Q12, up 38% from RMB 294.89 million in 2Q12. That represents a healthy gross margin of 16.5% in both the second and third quarter of 2012.”

Goldwind also reported a strong financial position with ample liquidity as of 30 September 2012. Since the beginning of 2012, Goldwind has reduced its total debt by RMB 1,768.87 million to RMB 6,125.01 million at the end of the reporting period. Due to ample cash of RMB 5,729.83 million, the Group reported modest net debt of RMB 395.18 million as of 30 September 2012.
Recently, Goldwind completed its first large-scale intertidal wind turbine project in Rudong, Jiangsu province. Twenty Permanent Magnet Direct-Drive (PMDD) GW109/2500 intertidal wind turbines with a capacity of 2.5 MW were installed and connected to the power grid. Today, Goldwind is China’s leader in coastal wind turbine R&D with the largest installed capacity of 58 MW in intertidal areas. This lays a strong foundation for further research and development of reliable offshore wind turbines and overall expansion of the market.

To meet anticipated market demand in challenging offshore environments, the Group is pursuing the development of larger capacity wind turbines with specifications that emphasize reliability and higher power generation efficiency. Goldwind was the first to install an offshore wind turbine in Asia in 2007with the completion of 1.5 MW PMDD WTG installation in Bohai Bay, a pilot project for exploration and research into offshore wind turbines.

In 2010, the Group leveraged its operational data and experience from existing offshore wind turbines when installing and connecting two prototypes of 2.5 MW intertidal wind turbine in Rudong and Xiangshui counties, Jiangsu province. Both units have operated smoothly and efficiently since installation. In addition, the Group has completed the initial design phase of its 6.0 MW PMDD offshore wind turbine and is currently assembling the first prototype model.

In August, the Group’s GW87/1500 low wind-speed turbine also received the Design Assessment Certificate from TÜV Nord, demonstrating that it can meet tough international standards. This certification will help support the Group’s efforts to further expand into overseas markets. The GW87/1500 series is designed for IEC Class III wind resource areas with annual average wind speeds of 6 m/s to 8 m/s. The Group’s low-wind and ultra-low wind speed turbines can operate in 60% of the regions designated in the second batch of wind power project cited in the National Energy Administration’s12thFive-Year Plan.

In 2011, the Group also received the ETL certification for their 1.5 MW series and CE certification for the 2.5 MW series, confirming that the Group’s products meet North American and European market admittance standards. In addition, in July 2011, Goldwind’s 1.5MW PMDD wind turbine was certified by the international engineering firm Garrad Hassan (GL) for low voltage ride-through (LVRT) at zero volts, a testament to Goldwind’s PMDD design capability to meet the highest Chinese national standards.

2.5 MW series Shows Gains in International Market
During the reporting period, Goldwind successfully signed 2.5 MW PMDD turbine supply contracts for the Georgia Mountain project in the US and Theppana wind turbine project in Thailand. Moreover, three of Goldwind’s 2.5MW PMDD wind turbines were installed and commissioned at the Shady Oaks project in the United States. That project has a combined total capacity of 109.5 MW. In addition, the Group will commence installation of2.5 MW turbines in Australia for the Gullen Range wind farm. Currently,2.5 MW turbines have been successfully launched in mature wind turbine markets in the United States, Australia as well as in emerging markets like Thailand. 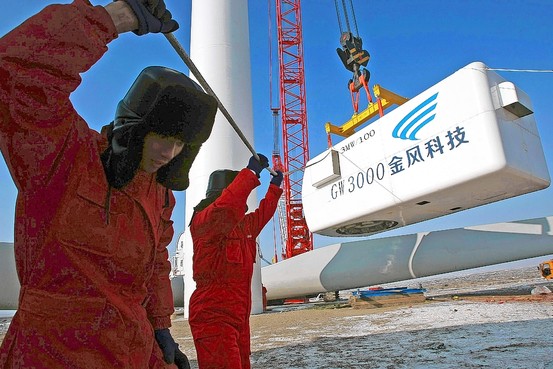 As the world’s largest and most experienced manufacturer of PMDD wind turbines, Goldwind’s accumulated installed PMDD capacity now exceeds 10GW with projects in more than 18 provinces across China as well as 17 countries on six continents. Goldwind has delivered over 330 MW of project to overseas markets. The Group reported an international backlog of 372 MW as of 30 September 2012, up 68% from 221 MW as of 30 June 2012.

Mr. Wu Gang, Chairman and Chief Executive Officer of Goldwind said:“In the last three quarters, competition in domestic markets has remained fierce. To maintain our Group’s continuous competitive advantage, we have accelerated product research and development into our low-speed and ultra-low wind speed series lines while at the same time making steady improvements in all of our offshore wind turbines. The domestic and international certifications we have received have been made possible through our hard work and determination to achieve excellence. The 2.5 MW series has also been successfully launched into international markets, which will help consolidate and further promote our global business development”. 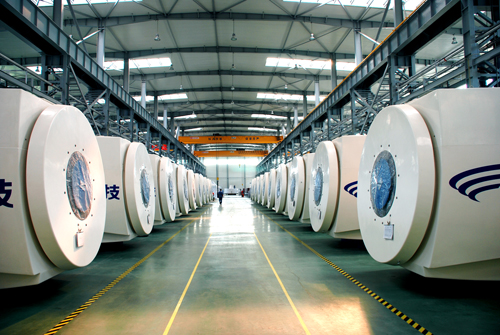 Xinjiang Goldwind Science & Technology Co., Ltd. (Goldwind) is the largest manufacturer of wind turbines in China, and among largest globally. With strong R&D capabilities, the company is the world’s largest manufacturer of Permanent Magnet Direct-Drive (PMDD) wind turbines, representing the industry’s next generation technology. Goldwind is listed on both the Shenzhen Stock Exchange (Stock Code: 002202) and the Hong Kong Stock Exchange (Stock Code: 2208).