According to the company the blades, measuring at 75 metres in length, are the world’s longest. In addition, they have a record rotor diameter of 154 metres and can produce 25 million kWh of clean electricity in offshore locations.

In May 2011, Siemens installed the first prototype of its SWT-6.0-154 wind turbine, which had a 120-meter rotor, and it has been operating for well over a year. However, the serial version of the 6 MW turbine will use a 154-meter rotor, Siemens says.

According to the company, the turbine’s gearless drive technology gives it a compact design, and the nacelle weighs just 200 tons. In addition, the blades are up to 20% lighter than blades manufactured with traditional methods, according to Siemens. 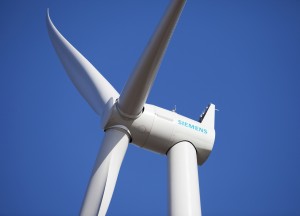 The company has already signed agreements to deploy the new SWT-6.0-154 turbines. In July, Siemens entered a deal with DONG Energy for the delivery of 300 SWT-6.0-154 wind turbines, which will be used for wind projects off the coast of the U.K.

The company will soon install two more SWT-6.0 prototypes at Gunfleet Sands, a British offshore wind power plant. This will be the first time that the Siemens 6 MW wind turbine will be tested offshore, the company notes. Both machines for this project will be equipped with the 120-meter rotor.