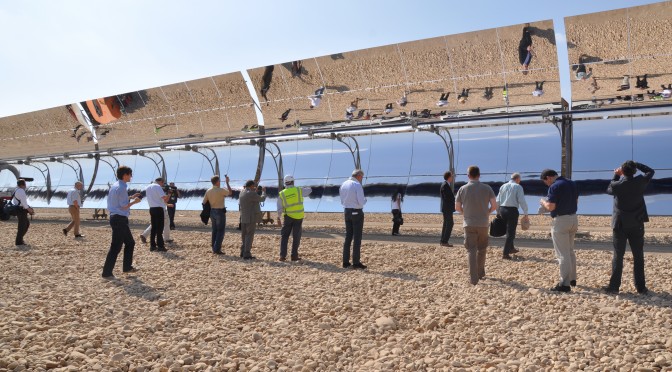 Egypt receives about six kilowatts/hour per square metre for nine hours or so per day from the sun.

What this means is that a square kilometre of land, if equipped from end to end with solar panels, could offer us 60 million kilowatts of energy per day, enough to light up a few residential blocks.

At last Egypt is taking solar power seriously, and the government has plans to set up a solar power plant with a capacity of 250 megawatts in Kom Ombo.

Both the German Reconstruction Bank (KFW) and the European Commission are involved in the project.

Seeing that the country has been having trouble with electricity and fuel of late, the conclusion is that renewable energy, such as solar power, is the way forward.

According to energy expert Zein El-Abidine Metwalli, only a few centuries back the world economy operated on the power of wind and wood. It was only with the onset of the industrial revolution that coal, and then oil, became so central to our lives.

The problem with coal and oil is not just that they are polluting. The fact is that we are running out of both. In the economy of the 21st century, a new source of energy, preferably renewable and clean, will take precedence. But which?

There is hydroelectric power, which supplies the world with nearly 15 per cent of its total energy, more or less the same percentage that nuclear power is contributing to our energy pool.

The oceans, scientists say, can provide us with substantial amounts of energy if we harness wave power. And the wind, too, is a force to contend with: Egypt already has several wind farms on the Red Sea, and more are planned for other parts of the country. Scientists say that Egypt has the potential to produce 20 per cent of its energy from wind farms by 2020.

However, of all the renewable sources of energy, solar energy may be the obvious answer to our energy needs, especially in a sunny country like Egypt. The sun has always been a source of energy. The sun’s rays not only keep the planet warm, but they also grow the plants that turn into wood for fuel, and support the organic life that over thousands of years has turned into oil.

With a little ingenuity and a bit of investment, we can perhaps cover our entire energy needs from the sun.

However, solar energy is only one of the many options scientists are working on. The biofuel industry, which turns plants such as corn into ethanol, is making inroads in the western hemisphere. This solves one problem, the shortage of oil, but it doesn’t reduce greenhouse gases.

Nuclear fusion, some claim, will one day be among the cheapest and cleanest sources of power. But it is not yet an option for us.

As a result, for now solar power remains among the easiest clean energy sources that we can tap. Countries like Kenya are already producing small solar panels at affordable prices. You cannot run an air conditioner on them, but you can keep a light, television, or small fridge running from them for a few hours without having to pay for electricity.

Imagine what will happen to ordinary people in this country if the price of electricity keeps going up. Now imagine how our lives would change if we had solar panels on top of our houses, instead of old car tyres and broken chairs as at present.

For the past 10 years, we have been experimenting with solar energy in various research centres across the country. Now we have managed to start making the panels themselves. However, though you can buy solar panels in this country, they are still too expensive, and most are assembled rather than manufactured locally.

Think of all those sunny places we have. Think of the entire North Coast, of Siwa, Aswan and Sinai. The prospects for solar-power generation are astounding. Let’s think big. Let’s think of making more solar power plants, not only to cover our needs, but to export solar power as well.

I have heard people saying that we need a ministry of water. This is fine, given how scarce water is becoming these days. But how about having a ministry for the sun, a ministry whose main job would be to promote research into solar energy and create solar power plants all over the country?

Let’s encourage average families to invest in solar panels. If we give them this option at affordable prices, I bet you in no time at all we will see solar panels sprouting up on every rooftop.