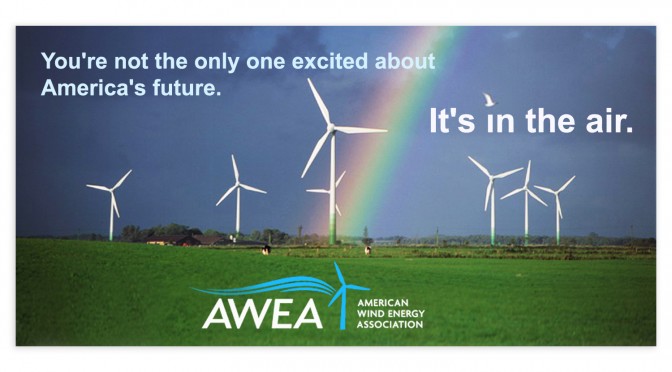 “This important proposal will give a much-needed shot in the arm to Michigan’s manufacturing sector, helping it diversify even more into the renewable energy industry and create Michigan jobs,” said AWEA’s Gramlich.

“AWEA fully endorses this proposal, and we’re encouraging all those in the wind industry supply chain in Michigan to become engaged in the effort.”

The American Wind Energy Association today announced its endorsement of the Michigan Energy Michigan Jobsballot proposal, which will increase Michigan’s renewable energy standard to 25 percent by 2025 if approved by voters on Nov. 6.

“A wind turbine has more than 8,000 parts that can be built in Michigan,” said Rob Gramlich, AWEA’s senior vice president for public policy and a Michigan native. “More than 30 states across the nation have renewable energy standards similar to Michigan’s ballot proposal. They are creating jobs in their local communities as well as clean, homegrown power. If these states can do it, Michigan can, too.”

According to a recent report by Michigan State University economists and academics, the 25 by 2025 proposal will create jobs and generate $10.3 billion of private investment in Michigan’s economy.

It will spark development of more wind energy in Michigan, which as of July 1, 2012 had 487 megawatts of wind-powered electrical generating capacity online, with enough wind farms currently under construction to double that by the end of the year.

Passage of the ballot proposal is expected to drive development of another 4,500 megawatts of wind power in Michigan, a state with one of the top 20 wind resource potentials in the country.

It will also continue the growth of wind factory jobs in Michigan, which has fast become a manufacturing powerhouse for the industry. At least 31 businesses produced wind components in Michigan at the start of 2012 and six more had been announced. For example, wind turbines are manufactured in Saginaw, and wind towers are now being made on a former brownfield site in Monroe.

In a report by President George W. Bush’s administrationon how wind can generate 20 percent of America’s electricity by 2030, Michigan appears in the top category of job creation due to the excellent fit between the skills and technologies available in Michigan and the needs of wind turbine manufacturing.

“A commitment to wind energy in Michigan will help us to continue our company’s growth so that we can generate more of the jobs needed to help diversify the state’s automotive-dependent economy,” said Don Naab, CEO of Danotek Motion Technologies of Canton.

“At Danotek we are bringing together an industry-leading team of technical experts to develop highly efficient and reliable permanent magnet generators for the global wind industry,” Naab explained. “Our technology is helping to make wind energy more competitive by both reducing the equipment cost, and increasing the amount of energy that each wind turbine can extract from available wind resources.”

“This November is the time to make a difference, and support Michigan’s proposed increase of our renewable energy standard,” said Marc Strandquist, CEO of Dokka Fasteners Inc., of Auburn Hills.

Dokka was founded in 2011 to be the most advanced hot forming fastener manufacturer serving the wind turbine industry in North America. So far the company has hired over 50 people, more than half of them skilled workers who were previously unemployed.

The Michigan Energy Michigan Jobs proposal has been endorsed by a wide range of groups, including more than 230 Michigan businesses, prominent Republican and Democratic leaders, unions, health professionals such as the Michigan Nurses Association, environmental groups, faith leaders and more.

More information about Michigan Energy Michigan Jobs can be found at www.mienergymijobs.com.