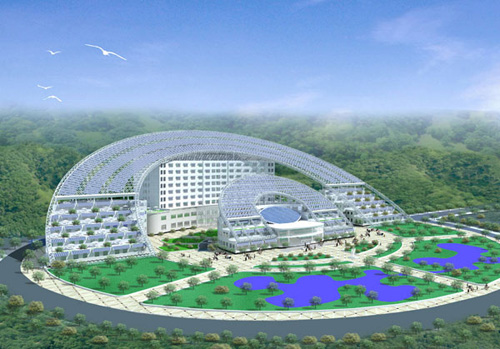 Himin Solar is responsible for the development and manufacture of heliostats. This 1MWe tower project has just commissioned 2 weeks ago.

Himin Solar also provides the Micro Emission Packaged Design Solution (Me Pad). The thermal collectors they annually sold are sufficient to cover an area of 3,000,000 square meters, equaling that of the entire European Union and twice that of North America.

Our 3,000-acre facility is located in Dezhou, Shandong, which has been named “China’s Solar City”. We currently employ more than 7,000 staff members, including a technology R&D group consisting of more than 400 employees. In addition, our work with the Chinese Academy of Sciences and Germany’s Fraunhofer Academy, have helped us at Himin to rise to the forefront of the global solar energy field. With 20 years of experience in the field of solar technology, we have the certifications of ISO9000, CE, TUV, SOLAR KEYMARK, SRCC, CSA, OCEANAMARK, etc. Himin now owns 312 national patents, having mastered the core technology of interference coating, high-temperature thermal power generation, sea water desalination, and much more. We have also taken part in 22 national projects, such as the National ‘863’ Project, National Technology Breakthrough Plan, National ‘Torch’ Plan, and so on.

Himin has more than 350 company standards which are set higher than the national standards. We have also taken part in the creation of the national standard for solar water heaters. With our world-class low carbon technical testing center and more than 18 laboratories, we guarantee top-class product research and development as well as quality control inspections of our concentrated solar power system (CSP).

Our low and intermediate temperature products are popular all over the world. In addition, the core components of Himin high-temperature thermal power generation are exported to Spain, Germany, France, Italy, India, America, Australia, etc. Their demonstration systems have been performing well for three years with excellent performance and stable quality.