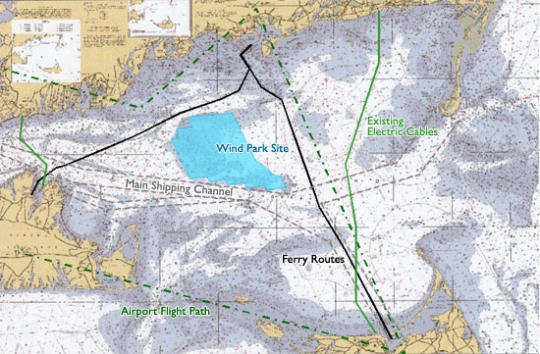 The FAA’s most recent determination found that the Cape Wind project poses no hazard to air navigation.

For the fourth time the Federal Aviation Administration (FAA) on August 15, 2012 issued a Determination of No Hazard to the proposed Cape Wind project, which, if constructed after a decade of planning, will be the United States’ first offshore wind farm.  Energy Management Inc., the project’s developer, proposes to construct and operate 130 wind turbines in a 25-square-mile shallow area of Nantucket Sound known as Horseshoe Shoal at an estimated cost of $2.5 billion.  The project has now received all required permits, including Construction and Operations Plan approval from the Bureau of Ocean Energy Management, Regulation and Enforcement and various other federal and state approvals, and a 25-year commercial lease from the Department of the Interior.

The FAA began its review of the Cape Wind project in 2002 and originally approved the project in May 2010, but the Cape Cod town of Barnstable and the Alliance to Protect Nantucket Sound, an environmental group created in 2001 to oppose the project, appealed the agency’s decision.  In October 2011, the United States Court of Appeals for the District of Columbia reversed the FAA’s decision and remanded the matter to the agency for further review of whether the project posed safety hazards to air traffic.  The D.C. Circuit found that the FAA had ignored its own regulations and failed to demonstrate that it had analyzed whether the project would negatively impact air traffic in approving the Cape Wind project.

The FAA’s most recent determination found that the Cape Wind project poses no hazard to air navigation, as the project falls within the agency’s obstruction standards and would not have any electromagnetic radiation effect on air traffic.  FAA regulations provide that a structure negatively affects visual flight rules (VFR) air navigation if its height is more than 500 feet above the surface and if it is located within two miles of a commonly traveled VFR route.  The Cape Wind project does fall within two miles of a commonly traveled VFR route, but the project’s proposed turbines will only reach 440 feet above the surface.  The FAA found that, provided the Cape Wind project adheres to the agency’s height restriction, files construction forms with the agency as required, and properly lights structures that may obstruct planes, the project will pose no hazard to air traffic.

Appeals of the FAA’s decision are certainly possible; the Alliance for the Protection of Nantucket Sound has already indicated it will appeal.  In addition, Republican Congressmen Darrell Issa (R-CA) and John Mica (R-FL) have suggested that the FAA may have been politically influenced to approve the Cape Wind project in 2010; a formal congressional investigation could add further delay to the Cape Wind project.

Energy Management Inc. plans to begin construction on the project in 2013.  Three-quarters of the Cape Wind project’s anticipated electricity output has already been sold through power purchase agreements with electrical utilities in Massachusetts, and Energy Management Inc. is now seeking to raise capital.  Each of the 130 proposed turbines will produce as much as 3.6 megawatts of wind power, and average expected production is 174 megawatts – nearly 75 percent of demand for Cape Cod, Martha’s Vineyard and Nantucket.