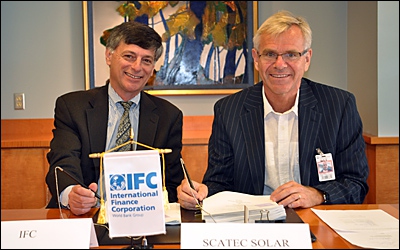 IFC, a member of the World Bank Group, and Scatec Solar, a Norwegian company specializing in photovoltaic solar systems, have signed an agreement to develop solar power projects that will supply renewable energy to address electricity needs in parts of West and Central Africa.

IFC InfraVentures, the Global Infrastructure Project Development Fund, and Scatec Solar will develop, design, finance, construct and operate solar photovoltaic plants each with the capacity to generate at least 10 megawatts of power. They plan to build a portfolio of projects in West and Central Africa, starting in Benin, Burkina Faso, Cameroon, Niger, and Togo.

The agreement will enable IFC InfraVentures and Scatec Solar to collaborate and benefit from each other’s expertise, leveraging the world-class technical expertise of Scatec Solar and the local knowledge, networks, and funding capacity of the World Bank Group.

Raymond Carlsen, Chief Executive Officer of Scatec Solar, said, “Joining forces with IFC InfraVentures allows us to combine Scatec Solar’s know-how in photovoltaic development, installation and operations with IFC’s expertise in financing and working with governments in a region where limited supply of electricity is one of the major challenges for growth. We believe that this partnership will be of great value to the countries we work in by reducing the time required from project development to power generation.”

Bernie Sheahan, IFC Director for Infrastructure in Africa and Latin America, said, “Solar power generation has great potential, but has had limited traction in Africa Scatec Solar brings solid know-how in solar energy and a strong commitment to Africa that make it an ideal partner for IFC to stimulate private sector investments in renewable energy.”

Africa has the fastest economic growth of any region, globally, with a rapidly increasing demand for electrical power. However, the lack of infrastructure in many areas has left people with few alternatives to relatively expensive and environmentally unfriendly fuel -based generation. Certain areas in Africa boast very favorable climatic conditions and solar power could provide an efficient alternative to thermal generation. Furthermore, solar power is well-suited to remote areas as it can be installed quickly helping improving rural electricity access.

IFC, a member of the World Bank Group is the largest global development institution focused exclusively on the private sector. We help developing countries achieve sustainable growth by financing investment, providing advisory services to businesses and governments, and mobilizing capital in the international financial markets. In fiscal 2011, amid economic uncertainty across the globe, we helped our clients create jobs, strengthen environmental performance, and contribute to their local communities—all while driving our investments to an all-time high of nearly $19 billion. For more information, visit www.ifc.org.