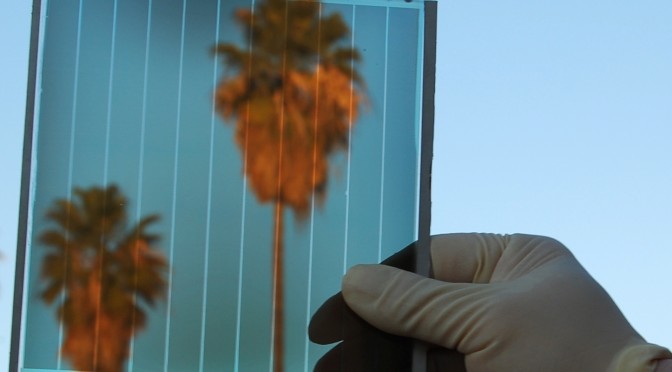 The new record was achieved as a result of collaboration between Solarmer’s materials development team; the Alternative Energy group at Philips 66 Technology led by its director, Dr. Ting He; and Prof. Hongbin Wu’s research group at SCUT.

The champion cell utilized a new polymer jointly developed by Solarmer and Philips 66, combined with the interface technology developed at SCUT’s Polymer Optoelectronic Materials and Devices.

“The breakthrough in efficiency offers a good opportunity for the commercialization of the organic photovoltaic technology,” said Dr. Byron Johnson, manager of Sustainability Technologies at Phillips 66. “This marks an important milestone for the industry and has the potential to deliver truly low cost energy for the world.”

“Our interface technology results in a marked improvement in OPV cell efficiency and is compatible with the roll-to-roll process, which is critical for manufacturing high efficiency and low-cost OPV cells on a large scale,” said Prof. Wu.

OPV is lightweight, has a better performance in low light and is easier to manufacture — making it a potentially cost-effective renewable energy technology on par with current conventional energy technologies.

“Solarmer remains steadfast in its mission to bring OPV technology to the market, and continuously breaking new ground is essential to achieving this goal. We are confident of breaking the 10 percent efficiency mark very soon,” said Woolas Hsieh, president and co-founder of Solarmer. “Solarmer is building an ecosystem to cover the entire OPV value chain. Forming partnerships is the smartest and probably the only way to go forward. The company is now focusing its efforts in manufacturing technology with the goal of delivering the first OPV products in 2013.”

South China University of Technology (SCUT) is one of China’s key universities operating under the direct leadership of the State Ministry of Education. Polymer Optoelectronic Materials and Devices is a research institution focusing on organic electronics and related materials.

Solarmer Energy, Inc. was founded in 2006 with the vision to offer renewable, affordable, and portable energy to all, especially the two billion people who do not have access to grid electricity. Solarmer is a world leader in OPV, with expertise in materials, devices and manufacturing processes. Solarmer is located in El Monte, California where the company has its headquarters and OPV technology development center.

Headquartered in Houston, Phillips 66 is an advantaged downstream energy company with segment-leading Refining and Marketing (R&M), Midstream and Chemicals businesses. The company’s R&M operations include 15 refineries with a net crude oil capacity of 2.2 million barrels per day, 10,000 branded marketing outlets, and 15,000 miles of pipeline systems. In Midstream, the company primarily conducts operations through its 50 percent interest in DCP Midstream, LLC, one of the largest natural gas gatherers and processors in the United States, with 7.2 billion cubic feet per day of gross natural gas processing capacity. Phillips 66’s Chemicals business is conducted through its 50 percent interest in Chevron Phillips Chemical Company LLC, one of the world’s top producers of olefins and polyolefins with more than 30 billion pounds of net annual chemicals processing capacity across its product lines. For more information, visit www.phillips66.com.