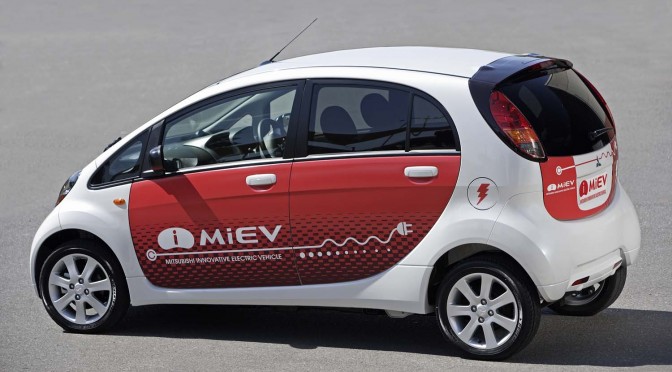 Additionally, the lap time was good enough to finish in 8th place overall from the 170 vehicles entered (132 vehicles recording a lap time/crossing the finish line) in this year’s Pikes Peak event.

The entire team was challenged early on in the event when the i-MiEV Evolution race car received extensive front end damage in the first practice session when driver and Team Principal Hiroshi Masuoka slightly misjudged his braking point for one of the numerous tight hairpin turns and went off course. The team worked feverishly to repair the damage to both the bodywork and the steering rack, resulting in no further track time for Pikes Peak rookie Masuoka in the practice sessions held on Days 2 and 3. Thanks to the team’s hard work, repairs were successful, and Masuoka was back on track in the i-MiEV Evolution for race day.

“Although we missed out on capturing the top spot by finishing 2nd in the Electric Division, I’m satisfied that we were able to compete in the challenging driving conditions of this Pikes Peak course using motors and batteries from the production i-MiEV,” said team principal and driver Masuoka after successfully completing the run. Masuoka also credited the team effort by stating “My mistake during the first day of practice where I went off course resulted in heavy damage to the car, and the team crew did an outstanding job to repair the car and bring back to life a perfect racecar. Thanks to our entire partner companies and team staff that helped allow us to compete in this event. I am very pleased with being able to deliver a great result for the team.”

The second Mitsubishi entry, a production 2012 Mitsubishi i-MiEV driven by professional SCORE International off-road racer Beccy Gordon, finished 6th in the Electric Vehicle class with a time of 15 minutes, 10.557 seconds. The 2012 Mitsubishi i-MiEV (fitted with safety equipment and modified front and rear bumpers) was the only street-legal 100% electric-powered production car to be entered in the Electric Vehicle class this year.

“The Mitsubishi i-MiEV was awesome. It produced a lot more power, especially torque, than I had expected. The handling was also very good because so much of the car’s weight, the electric motor and lithium-ion batteries , sit so low in the chassis. This allowed me to carry much more speed into the corners than I expected, and the torque from the electric motor helps to propel the car out of the corners. The car is really peppy,” said Beccy about her Pikes Peak race car. “Considering my car was 100% stock, I can definitely see all-electric cars succeeding in motorsports.”

With a starting net value of $21,625* for the well-equipped entry-level ES model (the premium-grade SE version begins at $23,625*), the 2012 Mitsubishi i-MiEV is not only the most affordably-priced mass-market electric vehicle available in the United States but is also the first of several new advanced, alternative-fuel production vehicles that the Japanese auto manufacturer plans on bringing to the North American market in the next few years.

Mitsubishi Motors North America, Inc., (MMNA) is responsible for all manufacturing, sales, marketing, research and development operations for Mitsubishi Motors in the United States. MMNA sells coupes, sedans and sport utility vehicles through a network of approximately 400 dealers. In November of 2011, MMNA launched the battery-powered electric vehicle Mitsubishi i-MiEV as part of a corporate mission to offer consumers more environmentally responsible modes of transportation. This battery-powered electric vehicle technology addresses the need for vehicles that produce zero tailpipe emissions and support a growing agenda for sustainability.