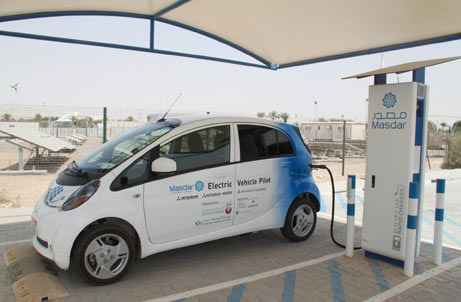 Abu Dhabi has installed the first rapid charging station in the Middle East, reducing the time taken to recharge electric cars by over 90 percent, it was announced this week.

The CHAdeMO-certified Rapid Charger, the first of its kind in the region, has been installed at Masdar City, the low-carbon development backed by the Abu Dhabi government, and was in collaboration with Mitsubishi Heavy Industries.

The pilot project aims to assess how efficiently the rapid charger technology will function in the region’s harsh climatic conditions and will help to reduce the time taken to recharge electric vehicles (EVs).

Previously, EVs had to be charged for six hours continuously using standard electrical outlets. With the arrival of the new rapid charger, the EV’s batteries can now be charged up to 80 per cent in approximately 30 minutes.

“With a reduced charging time, a greater number of EVs will be in operation throughout the day. This project embodies Masdar City’s commitment to promoting electric vehicles. As an open technology platform, Masdar City will continue to work with various clean technology providers to provide sustainable transportation systems,” said Naser Al Marzouqi, head of facilities management at Masdar City.

As part of a pilot project, Masdar launched a fleet of 12 Evs in January 2011. A five-door hatchback that seats four people, the EVs have a cruising range of about 150km and are the first mass-produced, 100 percent electric vehicles used in the UAE.

To date, the vehicles have transported over 35,000 passengers and saved approximately 33,000 tons of carbon dioxide emissions.