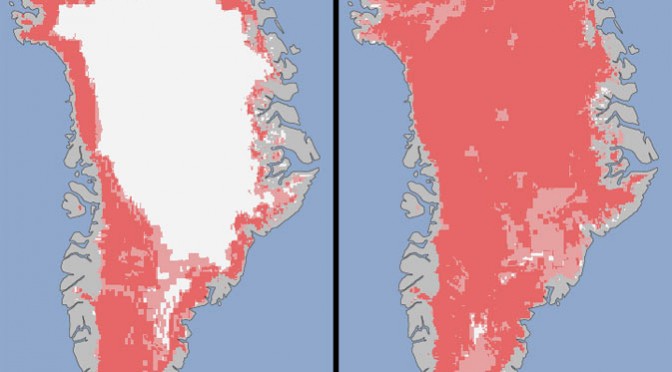 As the world’s media attention turned this week to the Summer Olympics in London, a somewhat downplayed story of astonishing implications was emerging from the world’s biggest island: almost 97% of Greenland’s ice sheet experienced melting during early to mid-July.

In a normal summer period, according to the National Aeronautics and Space Administration (NASA), only about half of the massive ice sheet experiences thawing periods.

In a press release, NASA officials noted that for several days this month Greenland’s surface ice cover melted over a larger area than at any time in more than 30 years of satellite observations.

“Nearly the entire ice cover of Greenland, from its thin, low-lying coastal edges to its 2-mile-thick center, experienced some degree of melting at its surface, according to measurements from three independent satellites analyzed by NASA and university scientists,” the press release said.

Officials said melt maps derived from the three satellites showed that on 8 July, about 40% of the ice sheet’s surface had melted. By 12 July, 97% had melted.

The extreme melt event coincided with an unusually strong ridge of warm air, or a heat dome, over Greenland, which has the largest ice mass in the Northern Hemisphere, the press release said.

“The Greenland ice sheet is a vast area with a varied history of change. This event, combined with other natural but uncommon phenomena, such as the large calving event last week on Petermann Glacier, are part of a complex story,” Tom Wagner, NASA’s cryosphere program manager in Washington, was quoted as saying.

“Satellite observations are helping us understand how events like these may relate to one another as well as to the broader climate system.”

Officials also said researchers have not yet determined whether the extensive melt event will affect the overall volume of ice loss this summer and contribute to sea level rise.

BBC News reported that NASA chief scientist Waleed Abdalati said scientists would be trying to figure out the meaning of the mass melting for years.

“When we see melt in places that we haven’t seen before, at least in a long period of time, it makes you sit up and ask what’s happening,” Abdalati was quoted as saying.

The BBC report added Abdalati said that, because the Greenland-wide melting has happened before – in 1889 – scientists are not yet able to determine whether this is a natural but rare event, or if it has been sparked by man-made climate change.

One thing is certain, however. The rapid and extensive melting of Greenland’s ice sheet will no doubt increase concerns about how global warming is affecting our world and everything in it. Last week this blog linked to a post from the US National Resources Defense Council about the link between climate change and the recent extreme weather parts of the world has been experiencing.

While Europe, with its 2020 renewable energy and climate change targets and Emission Trading System, is probably the world leader when it comes to legislation designed to curb climate change, it can still do more.

EWEA has called on the EU to move to a 30% carbon reduction target for 2020 because the economic recession and related decline in industrial output has made the 20% target easy to achieve. We have called on the EU to fix its ETS, which is currently not working properly since the price of carbon has plummeted, by withholding and eventually deleting many permits to emit carbon from the market which should boost the carbon price.

We also believe that Europe’s electricity sector can be 100% carbon-free by 2050, saving the planet from tons and tons of CO2, with wind power – one of the most mature renewables – providing half Europe’s electricity supply. One important step to achieving this is for the EU to agree a new renewable energy target for 2030.