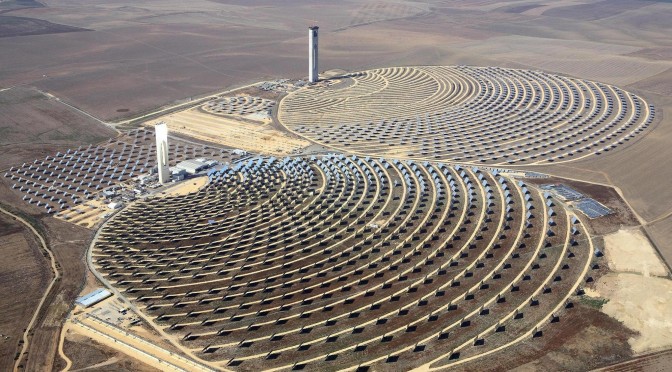 These requirements open the door for concentrating solar power (CSP) installations, some of which, like Solar Reserve’s Crescent Dunes concentrated solar thermal project, already incorporate storage in their design.

In 2012, nearly 3 gigawatts of solar energy projects were submitted for environmental review in Chile, of which 693 megawatts have already been approved. This accounts for 40 percent of all new generation seeking environmental approval in the country.

Despite the enormous interest expressed by developers over the past year, only a single one-megawatt grid-connected project has been completed to this point.

So why are we seeing so much activity? There are several explanations: the Atacama Desert offers some of the best solar radiation indexes in the world; the euro crisis; demand stagnation; cutbacks in traditional solar markets that are forcing companies to look elsewhere for new business; and speculators who have been securing land rights in the region.

Who will be buying all of this power? To this point, most of the interest has been expressed by the Chilean mining industry. Some of the mines, which export product to environmentally conscious markets, have large carbon footprints, and company leaders fear this may impact business. Moreover, electricity prices in in Chile recently hit more than $0.25 per kilowatt-hour on the spot market. These concerns, coupled with the rapidly falling cost of PV technology, could make Chile one of the first viable, non-incentivized solar markets in the world. With its high levels of solar radiation, the northern part of the country holds particular promise.

The market should seem pretty straightforward: the mines sign power purchase agreements (PPAs) with solar developers. But in reality, it’s not that simple. Supply management and financing remain major hurdles that have yet to be overcome.

Photovoltaics, unable to guarantee steady output, require backup, and northern Chile’s grid transmission links are too weak to import low-cost hydropower from the south. The existing coal plants are slow to ramp up, and the availability of natural gas generation is limited. So, a large share of solar energy in the matrix would require diesel backup, driving up marginal costs and diluting environmental benefits.

With regard to financing, banks require a signed PPA to even consider funding a project. Negotiating PPAs has proven difficult with the highly volatile electricity market in Chile. Since the beginning of 2012, average retail electricity prices have ranged from a low of $0.065 per kilowatt-hour to a high of $0.27 per kilowatt-hour. In Chile, electricity generators (GENCOs) contract to supply a specific amount of energy at a fixed price, as the mines have consistent requirements. Potential financiers are wary of being caught out when solar generation does not meet demand. This forces the GENCOs to contract costly diesel-generated electricity on the spot market in order to honor the original agreement. The latter issue would be solved if energy storage were a cost-effective option during times of high solar production.

These requirements open the door for concentrating solar power (CSP) installations, some of which, like Solar Reserve’s Crescent Dunes project, already incorporate storage in their design. However, even with their massive economies of scale, these plants cannot compete with PV on price alone, and development and construction takes many years. Still, some firms are pushing forward with plans for CSP plants, such as Ibereólica’s 360-megawatt Pedro de Valdivia project. The plant will reportedly cost $7.25 per watt to build –more than three times what it currently costs to build a utility-scale PV plant on a dollars-per-watt basis.

Despite the grid infrastructure and financing hurdles, Chile’s PV market has begun to take off, just not as quickly as the number of megawatts in development might suggest. In the next year, it’s likely that the country will see a number of projects in the tens-of-megawatts range being built. These smaller installations will be transitional until PV, and possibly CSP, can better compete with spot electricity pricing. Until then, the land grab continues.

Renato Valdivia is Director of Central Energía, a consultancy and information platform for the Chilean Electric Market. GTM Research is tracking more than 3 gigawatts of utility-scale projects in Latin America, including developments in Chile, Peru, Brazil, Argentina, and Mexico. For more information, please contact Justin Freedman.