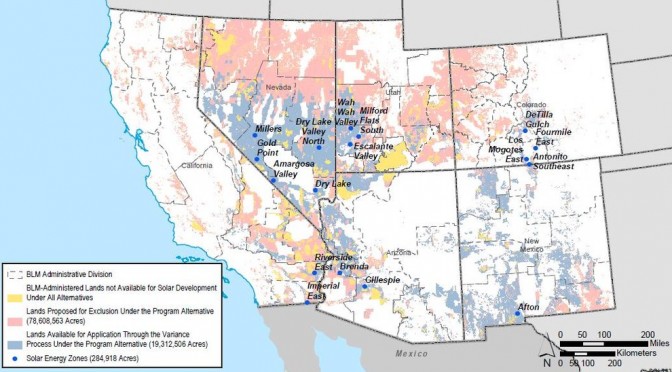 “We appreciate the extensive efforts of Secretaries Chu and Salazar and the Departments of Energy and Interior on the Solar PEIS and we look forward to developing our next generation of utility-scale concentrated solar power projects to provide utilities with clean, sustainable and reliable solar energy.”

The Departments of the Interior and Energy released a final plan for solar energy development on public lands in the West, marking a historic milestone in our nation’s effort to accelerate environmentally responsible renewable energy generation that will create jobs, reduce greenhouse gases, and contribute to national energy security.

The plan known as the Solar Programmatic Environmental Impact Statement is the first-ever roadmap for large-scale solar energy development on lands managed by the Department of the Interior’s Bureau of Land Management in Arizona, California, Colorado, Nevada, New Mexico, and Utah.

Over the past two years, a diverse coalition of stakeholders – including solar energy companies, clean energy advocates, conservation groups and electric utilities, working together in an unprecedented fashion – provided joint comments and actively engaged in finding solutions that work for solar energy as well as for wildlife and wildlands. These groups advocated for balanced, guided development that avoids, minimizes, and effectively mitigates impacts on wildlife and sensitive lands and reduces the uncertainty and time for permitting of solar power projects and associated transmission – a process advocates call “smart from the start.”

This diverse group of companies and organizations is unanimous in thanking Secretary of the Interior Ken Salazar, his staff and the Bureau of Land Management, as well as Secretary of Energy Steven Chu and his staff, for their collaborative efforts to provide a robust solar program and for presiding over an open and transparent process. We applaud both Departments’ intentions to further the nation’s clean energy goals in a balanced, environmentally-sensitive way that minimizes the controversies that can attend large new energy developments on public lands.

There are still important efforts remaining both at the programmatic and project levels to flesh out the central tenets laid out in the solar plan. Over the next several days, the groups will review the SPEIS in closer detail, and we look forward to continuing to work collaboratively to implement an environmentally responsible solar energy program.

Following are statements of support:

“Interior’s final solar program culminates two years of a lot of hard work and commitment by many diverse groups,” said Helen O’Shea, director of NRDC’s Western Renewable Energy Project. “I’m hopeful that the plan will establish a roadmap that provides a balanced approach to addressing the climate change challenge and protecting wildlife and critical lands while moving our nation closer to meeting our clean energy goals.”

“The BLM Solar plan demonstrates that we as Americans don’t have to choose between clean alternative energy and a healthy environment,” said Mike Daulton, vice president for public affairs at Audubon. “We can have the future we want – one where we enjoy a healthy climate, and where birds and other wildlife thrive.”

“Renewable energy development on federal lands is essential to reaching our national clean energy goals,” said Arthur L. Haubenstock, vice president of regulatory affairs at Brightsource Energy Inc. “We appreciate the extensive efforts of Secretaries Chu and Salazar and the Departments of Energy and Interior on the Solar PEIS and we look forward to developing our next generation of utility-scale concentrating solar power projects to provide utilities with clean, sustainable and reliable solar energy.”

“Renewable energy is vital to our economy and our planet’s survival. We are pleased that Secretary Salazar has produced a roadmap for how to get to a renewable and environmentally sustainable future,” said V. John White, executive director of the Center for Energy Efficiency and Renewable Technologies.

“Colorado’s clean energy economy is one of the greatest success stories to date. Smart planning that identifies the best places for large solar projects will help provide the tools we need to keep building renewables here and across the west – putting Americans to work and protecting conservation values,” said Bill Ritter, director of the Center for the New Energy Economy at Colorado State University and former Governor of Colorado.

“Clean Line Energy is pleased to see the Solar Programmatic Environmental Impact Statement moving forward,” said Jimmy Glotfelty, executive vice president of Clean Line Energy. “We believe that this collaboration is a step in the right direction that will lead to building solar energy transparently and responsibly in the West, ultimately resulting in a cleaner energy economy.”

“The need for significant quantities of renewable energy has never been greater,” said Nancy Pfund, founder and managing partner at DBL Investors. “The Solar Program that will be established through the Solar PEIS issued today holds the promise of using appropriate federal lands to serve the public good, by providing clean energy at scale to power our economy. The Solar PEIS represents the hard work and dedication of the BLM, the Departments of Energy and Interior, and many environmental and renewable energy stakeholders, all of whom recognize the great importance of renewable energy to our future and who promote the use of our federal lands for this great purpose. I applaud their efforts, and look forward to the realization of the promise of this new solar program for federal lands.”

“It’s smart business to guide energy development to places where conflicts with nature can be avoided or minimized. Being smart from the start will allow more projects to move ahead, providing good paying jobs while reducing the risk to wildlife and other natural resources,” said Jim Lyons, senior director of renewable energy at Defenders of Wildlife. “Balancing our nation’s energy production by increasing solar, wind and geothermal sources will strengthen our economy, improve energy security and reduce greenhouse gases. This solar energy plan is an important step in that direction.”

“This is great news for business across Arizona, particularly here in Greater Phoenix where we host many leading solar companies and research institutions,” said Barry Broome, president and CEO of the Greater Phoenix Economic Council. “Large-scale solar energy development on public lands is key to Arizona making the most of its natural assets – our abundant land and sunshine – and to getting our state economy on a growing, sustainable track.”

“The Department of the Interior has taken an enormous step forward in establishing a plan for rapid, utility-scale development of Arizona’s solar resources on American lands. Arizona’s first solar energy zones are a terrific start – directing development and driving investment in transmission so that planners and developers can work together to build this industry. It is my hope that the success of this program will build upon itself, and that these zones are the first of many low conflict sites we can work together to identify for renewable energy development,” said Kris Mayes, former Arizona Corporation Commissioner and professor of law at Arizona State University.

“The release of the final Solar PEIS marks the beginning of a new era for how energy can be developed on our public lands for both people and nature,” said Michael Powelson, director of Energy Programs at The Nature Conservancy. “The Bureau of Land Management should be applauded for taking a giant step forward on developing the structure and substance of a mitigation program, which avoids high priority conservation areas and ensures all impacts are addressed.”

“Pacific Gas and Electric Company delivers some of the nation’s cleanest electric power. More than half of the electricity we deliver to our customers comes from sources that are clean and/or emit no greenhouse gases. This includes a growing portfolio of solar energy, which we project will contribute about forty percent of our total Renewables Portfolio Standard-eligible power deliveries  in 2020,” said Fong Wan, senior vice president, Energy Procurement for Pacific Gas & Electric. “We commend the Department of the Interior for its thoughtful and collaborative approach to developing the nation’s first solar energy plan that aims to increase the certainty around solar project development, while protecting sensitive habitat and wildlife – two goals which PG&E strongly supports. We look forward to reviewing the final full report.”

“This Administration’s design for solar development on public lands is based on sound principles, particularly by focusing projects in locations with the lowest impacts on wildlife habitat, lands and water,” said Barbara Boyle, senior campaign representative at the Sierra Club. “Limiting projects to low impact zones will also reduce the financial and natural resource costs of electrical transmission. We look forward to reviewing this plan and providing input to the Department of Interior so it will be implemented on our public lands with the strongest possible stewardship principles.”

“California’s renewable energy goals are among the most ambitious in the nation. In support of these goals, Southern California Edison procures more energy from renewable resources than any other utility in the U.S.” said Nino Mascolo, manager of government lands and forestry for Southern California Edison Company. “However, we continue to experience challenges related to the permitting and siting of transmission infrastructure interconnecting with renewable energy projects. The Solar PEIS seeks to address these issues. SCE looks forward to reviewing the final solar energy development PEIS, which we understand is intended to streamline the approval of solar energy projects and the necessary transmission system infrastructure to support such generation.”

“The release of the Solar PEIS represents a significant step for renewable energy development on public lands, helping in the fight against climate change while building a stronger clean energy economy,” said Jim Baak, director of policy for utility scale solar at Vote Solar. “Though work remains to refine the plan, we look forward to continued collaboration with DOI, DOE, conservation partners and private industry to chart the best path forward for harnessing homegrown clean energy on federally managed lands in an environmentally responsible way.”

“As America moves towards a clean energy future it is paramount that we balance energy development with the dire need to protect our last remaining wildlands,” said Chase Huntley, clean energy policy director at The Wilderness Society. “The Interior Department’s strong leadership puts smart planning at the forefront. This is the quickest route to meeting the renewables targets set by Congress consistent with protecting our dwindling undeveloped wildlands.”